The Walls Around Us by Nova Ren Suma 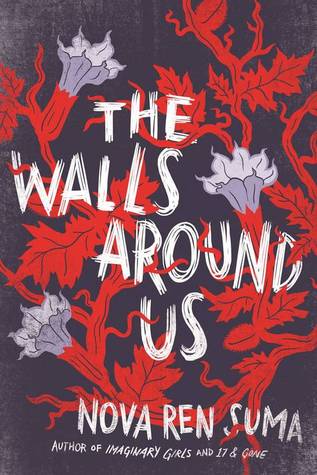 Algonquin Young Readers has been pushing Nova Ren Suma’s The Walls Around Us with the tag line “Orange is the New Black Swan,” which is so succinct and perfect that one wishes they could retroactively steal it. But pithy descriptors aside, Suma’s new young adult novel is a cluster of barbed wire wrapped in a fever dream; a tale narrated by two girls of differing backgrounds and circumstances, one living and one dead, and a third girl who links them in tragic and disturbing ways.

Walls is an origami fortune teller of a story, its narrative unfolding piece by piece, and sometimes backtracking on itself as its dual unreliable narrators dance around confronting their own guilt head-on. The story begins with Violet, a privileged, aloof young ballerina with Juilliard ambitions. We learn that her best friend, Orianna, was convicted for a brutal murder and later died in juvenile detention, and that Violet has flourished in the aftermath. Violet’s resentment of Orianna – also a ballerina, and poised for stardom herself – is an insidious ribbon throughout her story, eventually twining with the truth of what happened “in the tunnel made out of trees.” But it’s not until we meet Amber, Orianna’s fellow inmate at the detention center, that the story’s quiet and unrelenting slide towards revelation takes on a supernatural tint.

The ghostly element of The Walls Around Us could have felt like a cheap gimmick, but Suma builds the tension through her characters, each deeply flawed and scarred, and both harboring dark secrets. And there’s a harrowing grace to the stark realities of the detention center and its prisoners that elevates Walls well above similar fare in the genre. These are very real, imperfect young women with diverse backgrounds, desires, and fears, and each with their own perspective on justice and injustice. This last aspect, in particular, provides the most satisfying thread of the novel, giving its characters a fitting and poetic end while never compromising the terrible deeds that have brought them all together.

The Walls Around Us can be a tough, uncomfortable read, but it’s a beautiful and essential one, and it’s easily one of the best books of the year.