Andy Lightfoot and the Time Warp by Dr. S. Henshon 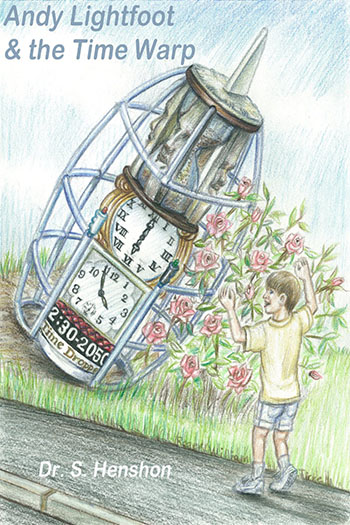 Did you watch the Back to the Future movies and felt like it could be real? What if not only the movies were real, but Marty McFly and Doc Brown were also real? If the developments they made created the ability for time travel so real, that in five years we were able to open time travel camps for kids to learn at an accelerated rate that defies the current level of education our children endure? If you can imagine those possibilities and set aside the substandard education level and abilities of ten year olds today, then you can get into Andy Lightfoot and the Time Warp which is the first book of what is sure to become a series. The first book leaves a lot to the expectation that you have followed movies from the 1980’s and don’t have children who struggle to understand multiplication at age ten, because the entrance application is several essays and more extensive than any college application we currently have.

Andy Lightfoot wants to follow in the footsteps of his parents. They are legendary time travelers who work for a time travel camp, and Andy knows he can’t get in on his famous last name. Mainly because when he was five, his parents were lost in time. No one knows exactly where they are, or more precisely, when they are. Andy is forced to live with his loving grandparents who are quite split on the idea of
time travel. Grandpa is supportive and feels Andy should follow his dreams, and help find answers in case his parent’s trip was actually sabotaged. His Grandmother is adamant that time travel is unnecessary, dangerous, and wrong.

Through hard work, Andy gets in to the Jules Vern Academy and although he struggles, with the help of newfound friends he is able to continue his studies. The first year is exciting, curious and leads to more questions than answers about the fate of his family. Worse, the school faces someone tampering with the laws of safe time travel and dangerous actions could lead to altering the events of today.

This series is within its own niche of interest. While it follows a Harry Potter type sequence of a young boy with special talents going to his first term at a special school, it lacks the details the Potter Series was so famous for. If the second book fills in the missing details and holes that appear in the first book this could be a terrific series. The liberties and assumptions the book makes concerning its readers, along with the lack of descriptions to truly delve into the world created by the author are the only things to prevent Andy Lightfoot and the Time Warp from being great.