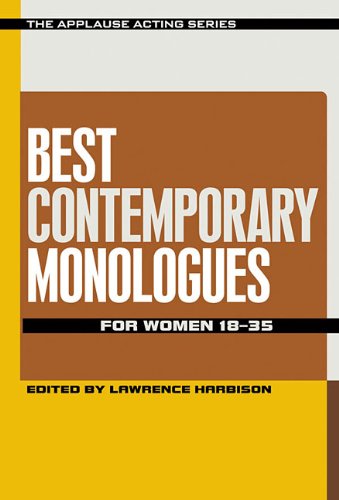 If you do any sort of acting, be it community theatre or Broadway, you know that you have to have a repertory of great monologues. Preferably, you want some that are comedic and others that are dramatic, ones that are appropriate to your age and “type,” and ones that directors haven’t seen dozens of other times already. That’s where this book comes in.

Editor Lawrence Harbison has scoured the most acclaimed plays of the last decade for monologues for men and women. These are the newest of the new – in the women’s version most of the source plays were no older than 2008, and in the men’s book (Best Contemporary Monologues for Men 18-35) none were older than 2000 – so these are not the classical monologues that have been performed to death. Some plays are Pulitzer winners while others are lesser known. In fact, if you’re a theatre fan, or just looking to get into contemporary theatre, these monologue books are a great source to find new plays to read, so they’re not just for actors.

The variety in both books is one of the most appealing things about them. The men’s book has everything from a teenage bully, to a reality TV producer, to a washed-up baseball player, or even the playwright Anton Chekhov himself. And if you’re an actress, in the women’s book you’ll find monologues where you can play a Scottish lady of the night in the 1820s, an interrogator at Guantanamo Bay, a sweet and ditzy Southern belle accused of murder, or a samurai vampire (yes, really). There are monologues for actors of different races, and every age is represented in the 18-35 spectrums that the books cover.

The one problem with both books is organization: the order of monologues in the books are alphabetically by the title of their source play. It might have been more helpful to organize them according to comedic or dramatic, since that’s often a factor for actors in deciding what monologues they need. 18-35 is also a narrow spectrum, and I hope Harbison has plans for monologue anthologies for actors in their 40s, 50s, and beyond. But even so, reading through the monologues from start to finish is absorbing in itself—just be prepared to add a dozen plays to your to-read list when you’re done!