Brilliant!: Shuji Nakamura And the Revolution in Lighting Technology by Bob Johnstone 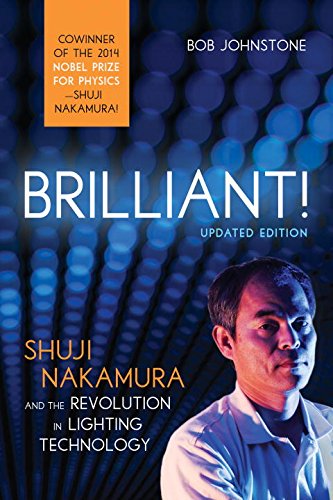 The title Brilliant is very appropriate for this trade paperback. The book is brilliant and so is author Bob Johnstone’s writing, although the title meant to signify the achievements of a brilliant little-known Japanese engineer, Shuji Nakamura. There is so much interesting information in this book that many readers will get weeks of reading pleasure. Much of the information was originally published in a 2007 edition, but seven years later when Nakamura received a Nobel Prize in physics, Johnstone updated the original material. The book reads like watching a movie with Nakamura the central character. His invention was the bright blue LED that has been and will benefit millions.

“This book recounts Shuji Nakamura’s inspiration story, much of it told here for the first time.”

The story starts back in 1962, and we learn about decades of Nakamura’s single-handed struggle to develop the nearly impossible. There are scores and scores of fascinating stories about researchers working on similar fields, their research struggles under insufficient budgets, failures and successes, and the inevitable litigations. The implication of bright blue LED, many times brighter than previous LED’s, was revolutionary. And the spinoff of this invention throughout business, technology and applications is staggering. Anyone having interest in technology, science, scientific research, biology and business will enjoy this volume.