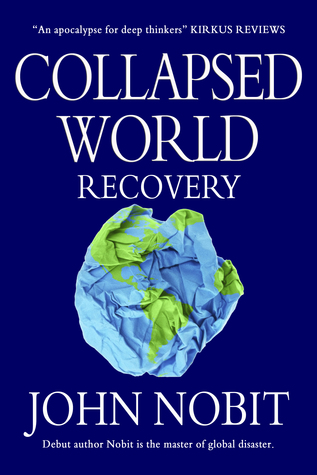 Collapsed World: Recovery by John Nobit is yet another post-apocalyptic story. In this book Nobit uses an interesting literary device: the soon to come events, as imagined by the author, are described from the perspective of the much farther future. Excerpts, translated to modern English from the Downfall of Humankind, published in 22,386 HE, describe the period of time shortly after the catastrophe. According to the author, the catastrophe happened in 2018, on Super Bowl Sunday. A lethal virus was released in Russia on this day. Whether this was done intentionally or not, nobody knows. This genetically engineered biological pathogen was practically irresistible. Even from its mutated, less fatal form only one-in-ten victims survived. As a result of this plague, the world population is reduced to about 250 million. The wide regions on the Earth became unpopulated and many countries, including America, collapsed. Though for those who survived, the virus turned out to be beneficial.

“We cannot change the past. All we can do is to make the future better.”

However, this story isn’t about these interesting-by-themselves benefits. This is also some kind of biography about John Robertson, an ordinary man recognized as one of the greatest historical figures from the Collapse period. The Collapse put humanity’s technological capability not just on hold, but set it back by many years. Dealing with surviving, humankind is on the verge of falling into a new Dark Age. Although John, an expert in GPS technology, plays a significant role in saving scientific knowledge for future generations, his more notable achievement lays in another field. His non-governmental organization, called Institute for Security and Justice, helps people to overcome chaos, neutralize gangs, and stabilize living situations beyond the borders of the newly established Texas Republic. On his own John learns that all the clichés concerning the post-apocalypse have nothing to do with reality. It’s hard to predict what future awaits humanity, what would be valuable, and how each person would behave. Yet, John’s efforts to “save the savable” should be appreciated.