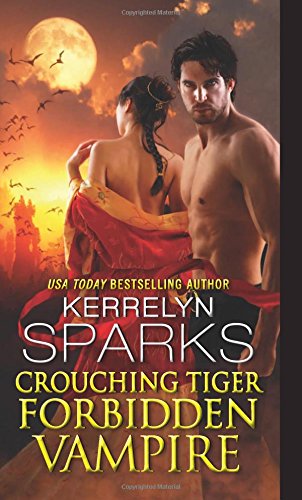 Russell the Vampire is the lead supernatural hero in the final book of Kerrylyn Sparks’ Love at Stake series. The entire story had begun with a Vampire who lost a tooth and fell in love, and ends with a very private vampire whose mission of revenge is thwarted by a were-tiger and is captivated by his human love for her. Crouching Tiger, Forbidden Vampire enters the world of Tiger Town where Jia, a were-tiger princess, expects her betrothed prince which she has no desire to meet, let alone marry, in one week. Her heart aches from the loss of her parents and brother who were brutally murdered and cut into pieces by Master Han to prevent them from reawakening to their second cat life. While she watched, the terror of that event created the need for vengeance and trained for the battle. Through an encounter with Russell, she strikes an arrangement to work together for justice and each find themselves working closely together yet hyper aware of the growing desire each secretly have for the other. Along the way they work to rescue the dragon boy who Master Han and the demon Darafer have captured to help their plot to take over the world with their superhuman soldiers.

This exciting story creates a twist of many cultures, an unparalleled chemistry between two people who come from such opposite worlds, joined by common goals, and secret dreams. A touching tale and a grand conclusion with every character from this series brought together for an epic battle, which spans heaven and hell right along with them.