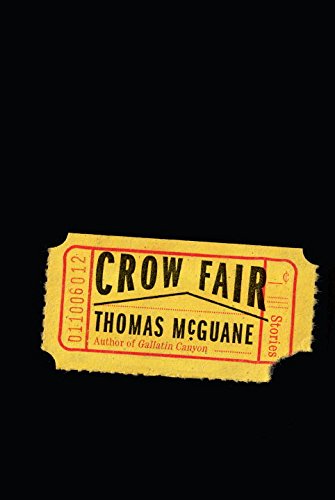 Crow Fair is a group of short stories, all set in Montana. The characters in the various stories are all at some level of an emotional shipwreck. Some are aging, some are ill; most are at various stages of life’s travails. For example, marriages are usually temporary arrangements that don’t resolve well.

Despite all these negative aspects, many of the characters are well developed and intriguing. In the story Motherlode, the main character Dave quits his job as an animal geneticist to throw in with a ne’er do well named Ray, who is involved in the world of drug sales. Ray essentially kidnaps Dave, and they drive off together to hook up with Ray’s drug connections. McGuane’s stories don’t generally end happily. Ray is murdered by his connection, who in turn disposes of Dave. All of this stems from an encounter at a café, where Dave had gone on the way to a farm visit that Ray short circuits with the kidnapping.

In these stories, women’s roles seem always a sort of auxiliary to men’s lives. In the story River Camp, two long-time friends maintain a seemingly close relationship that was long ago shattered by a one-night stand between one friend, and the wife of the other. Trying to re-kindle their friendship on a camping trip, they run afoul of a mostly incompetent guide, who commits suicide after a number of conflicts arise with the two campers. They continue their trip on the river, but are unable to master a powerful rapid, which in turn leads to their demise. This particular story is a detailed study of insecurities and depression.

In Crow Fair, the reader will find a gallery of interesting western characters, failed bankers, ranch hands, and fishermen. McGuane spins some interesting yarns, but due to the generally morbid tone of the stories I wouldn’t recommend this book for anyone suffering from depression!