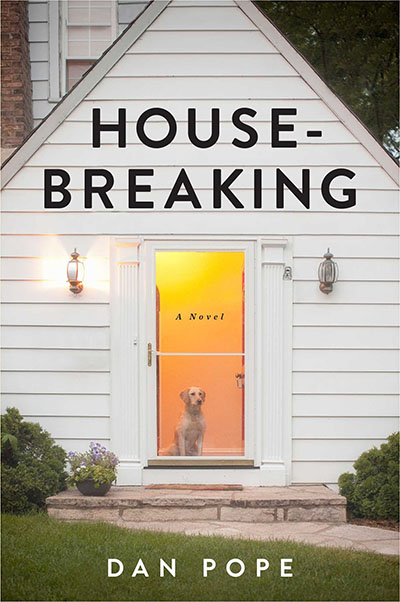 One of the beauties of being a reviewer is that every so often, one gets to discover an unknown gem in the dog-eared pile of books to be read. Housebreaking is one of those gems. Dan Pope has created characters that the reader is unlikely to forget or to stop thinking about long after the book is finished. Benjamin Mandelbaum has recently been kicked out of his home, for yet another philandering affair. Benjamin moves in with his aging father and back into his childhood room. Benjamin quickly finds out that his high school crush, Audrey Martin-Murray, has moved in down the street with her lawyer husband and troubled teenage daughter. A string of robberies happen in the neighborhood and Audrey’s husband is fighting his own demons.

The book is divided by Mandelbaum telling the story, and then each of the Martin-Murrays telling a portion of the progressing story. High school crushes that were once untouchable amazingly become accessible as adults. Audrey and her family have a skeleton in the closet that still haunts them in present day. Pope’s characters are so flawed that the reader cannot help but sympathize for them. Pope has the amazing ability to increase the stakes of the characters and the reader as the story progresses to a stressful climax. This is a book that refuses to be put down until the end is reached.