How Do Dinosaurs Stay Safe? by Jane Yolen, Illustrated by Mark Teague 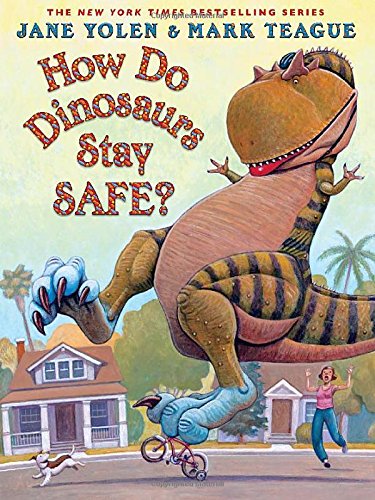 This book is apparently one in a series of at least a dozen, where dinosaurs model appropriate behavior for young kids. It’s a fantastic concept, because to a kid, what’s cooler than a dinosaur? But even dinosaurs have to wear their bike helmets when they go biking, and dinos know to dial 911 in case of an emergency.

The illustrations are charming and warm, and they capture the essences of the childlike dinosaurs and their wacky behavior (the dinosaur falling down the stairs while wearing a robber costume was a particular favorite). Yolen and Teague have found some interesting, more obscure dinosaurs to demonstrate their safety rules, ones you may not have heard of, like the feathery Enigmosaurus and the wildly striped Hypacrosaurus. So kids are getting a paleontology lesson in addition to their instructions in good behavior. As an added bonus, the book is written in simple rhyming couplets that are easy for any young reader to comprehend.