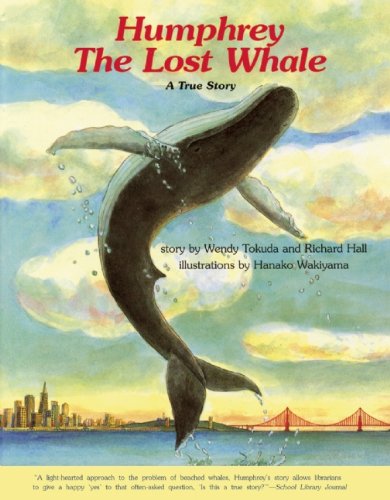 Humphrey the Lost Whale is a classic children’s book, that is both educational and fun – it also featured in an original episode of Reading Rainbow. A reprinting of the original 1992 publication and based on a true story, the book depicts the adventures of a whale that got turned around in the San Francisco Bay. Instead of heading back out to sea, Humphrey headed up the Sacramento River where the fresh water was making him sick. After several false starts, and poor Humphrey getting stuck under a bridge, he is able to head back in the right direction thanks to some very dedicated volunteers.

The book begins with a map of the San Francisco Bay, and a smaller map of the whole US continent to give children some context as to where events took place. The watercolor illustrations are lovely, and render Humphrey the whale incredibly expressive. At the end of the book there is a page that gives more detail about Humphrey, his multiple sightings in the area, as well as two other Humpback whales that traveled the wrong way up the Sacramento River back in 2007. Humphrey the Lost Whale is a perfect gift for animal loving children. It may also be wonderfully nostalgic for adults who remember Humphrey’s trial itself, or who grew up reading the original printing of the book.