Islands in the Mist by J.M. Hofer 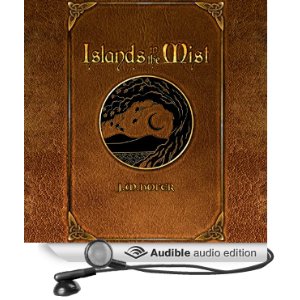 Welsh fantasy meets gritty realism in J.M. Hofer’s Islands in the Mist, the first in a planned trilogy of novels. The first book focuses on the plight of four powerful tribes being targeted by the sorceress Cerridwen, who has created an army of the undead using the Black Cauldron and her powerful magic. She is opposed by Bran, warrior of the north, and by Lucia and Gwion, two magically gifted individuals who have a connection to the mysterious island where Cerridwen was born. Ancient weapons, powerful spirits, and figures from Celtic legend all twist together in an epic adventure to figure out Cerridwen’s true plans and put a stop to them.

The best feature of Islands in the Mist is its aesthetic. Hofer describes a rich world, painting a detailed Celtic environment that doesn’t feel far removed from a real-life Ireland, Norway, or Gaelic countryside. The story travels: from dark forests to lonely beaches, from spiritual planes to the underworld. If this were a video game, it would be Skyrim. It is an open world filled with folklore, begging for adventure. At the same time, it contains enough references to real historical events (the Romans, for instance, play a minor, but important, role in the story) that it gains a touch of magical surrealism. Like Tolkein’s MiddleEarth, this world just might have existed on the periphery of our legends.

This writing isn’t always done justice by the narrator of the audiobook. John Keating’s Irish accent fits the setting, but he reads like a lecturer, not a storyteller. Every sentence is a little too monotone, a little too similar, to really capture the beauty of Hofer’s writing. And the individual character voices, while sounding a little different from each other, don’t change their cadence or rhythm of speech enough to hold the illusion, making dialog confusing at times. A really good reader has to be more of a performer and voice actor than it feels like Keating is able to be.

Ironically, the characters that inhabit this rich setting are very one-note anyway. They have little personality beyond their defined roles in the story. Bran is a warrior, always stalwart; always brave. Lucia is his love interest, and spends much of the book thinking about him. Gwion is the good son, with his main motivation being “to do good.” These are decent foundations for characters, but they are lacking in depth. In most books, this depth comes from flaws, because it is these very flaws that complicate a character. Without flaws, these characters are a little boring. Rather than making poor decisions (because of their flaws) that would twist the story and surprise the reader, it’s always obvious that the main characters will do the right thing. Bran will never betray his clan, Lucia will never be tempted by the power Cerridwen could offer her, Gwion (even though a young boy) is too clever to ever make a bad plan of attack. Indeed, the most interesting piece of the book is a set of chapters that are specifically centered around flaws, where Cerridwen tricks the tribe leaders—leaders who each have a very distinct flaw, such as lust, or ego, or overconfidence—into giving her what she wants. This is where the book feels most driven by its players, where events are happening because of decisions the characters are making, as opposed to the decisions the author is making.

Welsh fantasy was done a wonderful justice in the 1960s with Lloyd Alexander’s Prydain Chronicles, and some of the same characters and stories pop up here, albeit in a form that is more accurate to the original legends. Gwion’s history, involving a magical potion accidentally licked off his fingers, will be recognizable to fans of Prydain, as will the Cauldron Born and Arawn, Lord of the Dead. It’s all a little more impressive here, done with more grit, sex, and blood. Yet, though written for young adult readers, the Prydain Chronicles created characters you could instantly love and sympathize with. They were simple characters, but they had flaws, flaws they struggled with, flaws they tried to overcome throughout the course of five books. By comparison, Bran is the exact same person at the ending of Islands in the Mists that he was at the beginning, although with a nicer sword.

Maybe over the course of a trilogy, that will change. Maybe Hofer is making a slow build up, using Islands in the Mist to introduce characters she intends to explore in more depth later. Unless she does, Islands in the Mist will stand as a good story whose characters are hard to become invested in. Those interested in Welsh legend will find a nice foray into the subject here. Those looking for a story that will stick with them may wish to explore the Prydain Chronicles instead.