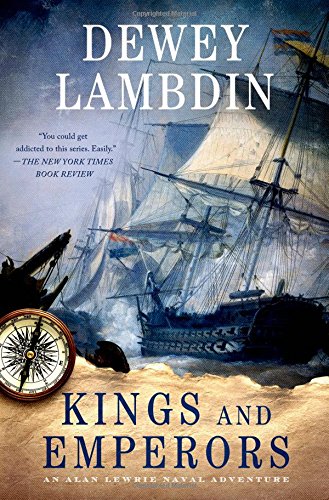 Kings and Emperors by Dewey Lambdin is a fascinating window into a turbulent time in European nautical history. This is the 21st installment of the Alan Lewrie Naval Adventure series, with this one taking place in Spanish speaking territories during the military campaigns of Napoleon Bonaparte (1769-1821) during his quest for control. This, however, serves as historical fiction and is written from the perspective of the British.

Would Thomas Mountjoy still have need of him and his ship, or would he and Sapphire be sent hallway around the world to do something else?

The star of the book once again is Brigadier Lewrie, who is both charming and humble. He is also mild mannered, flawed, has a sense of humor, and he is also a devoted servant of the English crown. In this story it is mostly English forces that are taking on Bonaparte. Readers are in for a fun adventure in this tale with a crew of soldiers that have a lot of personality, and back story in other installments. Readers are likely to compare this series to Patrick O’Brien’s nautical series, which might be of interest if they enjoy Lambdin’s books as well.