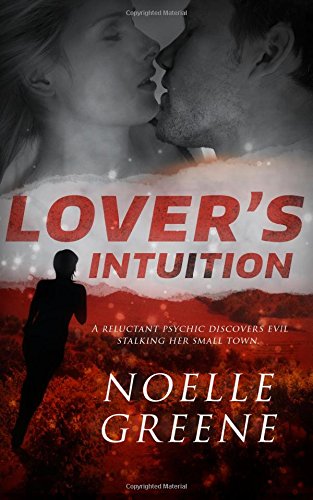 Lover’s Intuition by Noelle Greene is a thriller romance about a woman in the small town of Blue Mill trying to get her landscaping business off the ground. There’s a catch, though – she’s a psychic. The novel starts out with Camille on a date. The guy ditches her there for some unknown reason, causing her to run into his brother, Will. She gets an overwhelmingly bad feeling in the restaurant that night, and little does she know that her chance encounter with Will is going to change her life forever. They strike up a sort of relationship, but Will’s got issues and Camille has a few of her own, causing their blossoming romance to be more off than on throughout the entirety of the novel.

The plot itself is fairly simple: a meet-cute of two attractive people who are inexplicably drawn to one another but don’t realize their feelings until it’s almost too late. The antagonist of the story is pretty obvious from the start, meaning that the novel is a little less ‘mystery’ and a little more ‘thriller.’ Camille faces an onslaught of hatred from the small town folk that are supposed to be supporting her, making the secondary characters seem a little gray and underdeveloped. At points it seems like the side characters are merely there to create conflict and not develop the overall story. However, despite this, the two main characters are likable. Camille is self-sufficient and she doesn’t tend to feel sorry for herself even though Will has a few moments where he resorts to chest beating and bluster. He’s mean to her, and she loves him anyway. The book is compulsively readable, which means that readers are likely going to pick it up and not put it down until they’ve finished. It has a quick pace, the story doesn’t drag in any spots, and readers will find that they genuinely care whether or not Will and Camille are going to figure everything out. Definitely a must-read for fans of the genre, or for those who are just looking for a quick and pleasant read to snuggle up with.