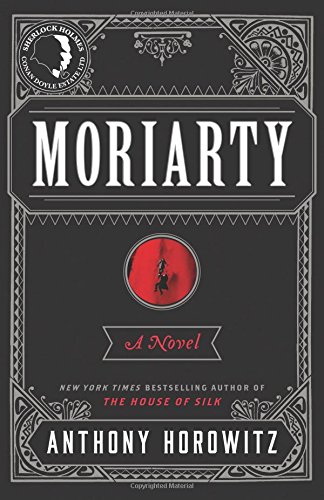 From the moment you read its title, Moriarty makes a lot of promises that are hard to live up to. First, it promises to be a story set in the world of Sherlock Holmes, a world of both literary acclaim and historical acclaim (as a glimpse into Victorian society). Second, it doesn’t set its sights on just a Holmsian setting—it claims as its own one of the greatest and most enigmatic characters in the mystery genre, Moriarty: a figure whose name is intimately known by readers, and yet who only ever appeared in a single Holmes story. Any media that uses him as a character, let alone a story named after him, must live up to the mystery and intrigue set by Sherlock Holmes and The Final Problem.

So then, how does author Anthony Horowitz set about this task? He attempts to circumvent it. Moriarty is the story of what happens immediately after the titular character’s death. The main character is a Pinkerton agent, Frederick Chase, freshly arrived in London to track down a mysterious American gangster seeking to take over Moriarty’s now leaderless empire. Chase is assisted in this task by Scotland Yard’s Athelney Jones, a devotee of Holmes. Together, they run a dangerous game of tracking the gangster’s movements in London, trying to close their net around him before he can close a noose around their throats.

Things start off strong. Horowitz launches into a break down of The Final Problem, pointing out its weaknesses and plot holes with the perception of a true lover of Conan Doyle, picking out details that only the most hardcore fans would notice. For a brief moment, there is the exciting possibility that the rest of the book will be like this, an essay and critique of Holmsian cases disguised as a story. Will the mystery of Moriarty be based on the very mysteries left unexplained by Doyle’s writing?

But no. Horowitz’s “mystery of the American gangster” quickly devolves into a manhunt that is more driven by action than by intrigue. Explosions, gunfights, and torture scenes replace quiet contemplation of the facts amidst pipe smoke. Gone, too, is some variation of Doyle’s important “opening study” scene, where the details of the case are laid out straight away for the benefit of the reader. Sherlock may have gotten more out of such details than the reader did, but the clues were still there, letting us follow along as the pieces of each mystery slowly fell into place. Instead, here we get a story that is only a mystery because we are lacking information. The twists exist not because we don’t see them coming, they exist because you cannot see them coming. The story holds us at arm’s length, not giving us all the facts until the last, revelatory, chapter – at which point we realize that this is because if we had all the facts, the mystery would have fallen apart. It isn’t competent enough to hold up to scrutiny. The final reveal is more contrived than clever.

That leaves us to find value in the characters. It is clear that Horowitz is trying to establish a familiar rapport between his two investigators. Athelney is a clear stand in for Sherlock, using Sherlock’s own methods and language to deduce clues and keep Chase, the “Watson” of the story, abreast of the enemy’s intentions. Unfortunately, this relationship never gains momentum. Jones is Sherlock with a family… which removes the most interesting thing about Sherlock, his aloofness and isolation from the rest of humanity. Chase is a Watson who knows something the reader doesn’t…again subjugating the draw of the original Watson as the slightly bumbling everyman, just as mystified as the reader.

Maybe the character that is most lacking is London itself. Doyle set Sherlock Holmes in Victorian times because that was his time, and he was intimately connected with it. To read any of the original Sherlock stories is to read a love letter to Europe; its cities, its countryside, its politics – all are handled with intimate detail, scrutiny, and grace. Doyle used mystery as an excuse to take his readers on a tour of his time period. He stuck to writing what he knew, and it helped that he knew quite a lot about the age in which he lived. Horowitz’s Victorian England cannot live up to this. He does not know Victorian England, and so once again he turns to circumvention. Most scenes, we are given only the bare minimum of a set piece (a street, an office, a home) without any of the esoteric details needed to bring it to life.

As such, the characters are left to act out their dialog in something that feels like imitation, a Hollywood set made up to look like Victorian London instead of actually being that place. And some things are even contradictory to that time period, such as one notable example where Chase has dinner with Athelney and his wife. Athelney’s wife asks her husband to leave her alone in the house with Chase, and Athelney obliges, heading out to run some shopping errands. This simply wouldn’t happen. No genteel man of the time period would have left a stranger alone with his wife, nor would the wife have requested such a thing. Such scenes hurt the authenticity of the story, and make it feel more like fan fiction than a worthy addition to Holmsian lore.

Fan fiction is a difficult thing to be when Horowitz is asking readers to accept this as one of the great Sherlock mysteries. This is a very light Holmes novel, one that promised to be more than that. When your book is called Moriarty, you have to be the Napolean of your genre. You can’t settle for less. Unfortunately, Athelney Jones is no Sherlock Holmes, Frederick Chase is no Watson, and Anthony Horowitz is no Arthur Conan Doyle.