Priscilla: The Hidden Life of an Englishwoman in Wartime France by Nicholas Shakespeare 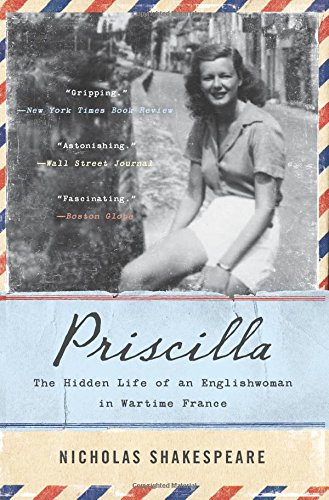 The year is 1940. German soldiers have invaded France, destroying both English and French troops as they cross the Seine and capture Paris. France falls to her knees beneath the Axis powers. Jews are sent to concentration camps. French soldiers are now prisoners of war farming to feed the German soldiers. French women, children, and seniors are starving. It seems inevitable that Germany will soon capture England and then the whole world. How would a foreigner in France during the Occupation fare?

“She had brought with her out of France material for a cracking story, not about an elite coming to terms with fascism, but about ordinary people—ordinary women especially—adjusting, screwing up, and developing survival skills of a deeply primitive and totally understandable, if ruthless, kind.”

In Priscilla: The Hidden Life of an Englishwoman in Wartime France, Nicholas Shakespeare imagines what it must have been like for his beautiful, blonde, blue-eyed aunt to be in France during the occupation. His research is based on letters, interviews, official documents, autobiographical fiction written by Priscilla and her father, and accounts by people in similar situations. This intimate biography brings to life the day-to-day realities of the occupation. In hindsight, historians can see that the occupation lasted four long, hard years, but at the time there was no end in sight. The Germans told the French that England had gotten France into the war and then abandoned them. They were certain that England would fall next. This put Priscilla in a precarious position, and when her French husband’s aristocratic family refused to help her, she was sent to Besançon, a camp for British foreigners, until she learned to use her beauty not only to survive but also to thrive.

Shakespeare admits, “At first glance, I found it embarrassing to discover what Priscilla got up to. Of course, I wished for my aunt to be heroic. I wanted her to be an exception. But she was not an exception, she was an ordinary woman in extraordinary circumstances.” This not only shows the author’s integrity, but also the appeal of the biography. He is competing neither with the biographies of politically powerful people during WWII nor the tragedies of concentration camp prisoners. Instead, Priscilla is a rare glimpse into both the privileges and hardships that the average middle-class woman faced during wartime France.

This book is a must for Anglophone Francophiles, WWII history buffs, and fans of books such as Irène Némirovsky’s Suite française.