The Education of Brother Thaddius and Other Tales of DemonWars by R. A. Salvatore 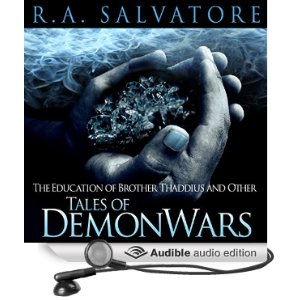 The Education of Brother Thaddeus and Other Tales of DemonWars is, as might be surmised from the title, a collection of short stories taking place in the world of R.A. Salvatore’s DemonWars series. The first concerns an elf-trained human ranger and his centaur companion as they hunt goblins in the forest around a somewhat isolated settlement which unknowingly enjoys the two’s protection. The ranger’s old mentor pays an unexpected visit, and brings news that he cannot ignore. The second story follows teenage girl, a petty thief nearing the end of her court-ordered indentured service to a rather unusual merchant, whose wares are sometimes more than they appear. He himself turns out to be more than he appears, not merely a merchant, or even the smuggler the girl took him for, and she finds herself agreeing to stay on in his service. In return, he grants her custody of one of the items in his inventory: a particularly fine and very unusual lute. The third story, by far the longest of the three and sharing its name with the collection itself, takes place in the aftermath of a great battle, the culmination of a mighty war. It follows several members of the prevailing religion in the nation, the Abellican Church, as it copes with the aftermath of rebellion, heresy, and war. In particular the titular character, a young monk of the order with both a great affinity for the magic that is considered sacred by the church, and serious misgivings about the decisions being made by that church, must decide where his loyalties truly lie.

The Education of Brother Thaddeus and Other Tales of DemonWars seems to act in many ways as a set of bookends to the author’s DemonWars series (a pair of trilogies with a stand-alone novel between). The first two stories in the collection provide some background for important characters in the rest of the series, and the third deals with both the immediate and unfolding aftermath of the climactic battle at the conclusion of Immortalis, the last book in the second trilogy. While this will leave a listener who is not familiar with the series at something of a disadvantage, the author does a solid job of providing exposition without slapping his audience in the face with it, so that an uninitiated listener is more or less caught up in short order. The two smaller stories that begin the collection draw on some pleasingly familiar fantasy tropes, but the author doesn’t lean on them, and so they don’t come across as weak or clichéd. The third story has elements of politics, adventure, and conspiracy, and the outcome of, for example, the power struggle within the Abellican church is fairly compelling, even to one unfamiliar with the series and thus not previously invested in the organization. Although it seems obvious, it may be worth mentioning that the third tale’s post-endgame setting makes it a less than ideal listen for someone who has not read the previous novels and who is looking to pick them up.

The writing itself is of a high quality; the author’s descriptions full of imagery but not overly florid or clogged with unnecessary detail; the drama is compelling but not excessively drawn out; the fight scenes are clearly depicted, with a sense of urgency; the dialog is well thought out, with each character having a distinct and recognizable voice. Adding to this last is some fairly excellent voice work, both readers (male and female, according to the perspective characters of the two shorter stories, and then male alone for the third and longest) bringing clear enunciation, an understanding of mood and tone, and a clear, distinct, and compelling set of character voices to the reading. The third story, unlike the first two, has several different perspectives from different characters. While only one of them is female – and the section from her perspective is brief – one does wish the female reader could have returned for it, although the decision seems more likely to have been a practical consideration than any stylistic choice.

Ultimately, The Education of Brother Thaddeus and Other Tales of DemonWars is an enjoyable listen, and while someone familiar with the DemonWars series and invested in it’s history and characters will certainly get more out of it, there’s plenty here for someone who has never picked up a DemonWars book before, although if you do intend to read the series, this is probably not the place to start.