The Extraordinary Journey of the Fakir Who Got Trapped in an Ikea Wardrobe: A Novel by Romain Puertolas, Translated by Sam Taylor 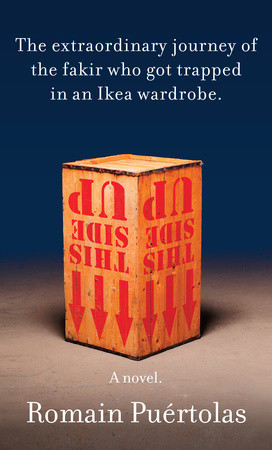 This is a story about a poor man, a fakir, from a northern Indian village who is sent by his fellow villagers to Ikea in Paris to buy a new nail bed. Such a simple errand. Fly into Paris, find Ikea, conduct the transaction, fly home the next day with new nail bed in tow. But nothing is simple for Ajatashatru Oghash (pronounced: a-jar-of-rat-stew-oh-gosh! This pronunciation comes courtesy of the protagonist himself), who soon finds himself embarking on an unplanned journey around the world.

“A heart is a little bit like a large wardrobe.”

The plot is farcical and the language and clever wordplay serve to keep the story zipping along at a fast clip. The result is a zany, almost slapstick feeling, at times akin to a Monty Python skit. This is both its strongest feature and its greatest shortcoming. The book is a lightweight, comedic, romp – genuinely funny, but which ultimately falls short of expectations because there was the potential for so much more. The author touches on an endless list of potentially interesting topics but then does little to explore any of them in-depth.

Most noticeably, Aja’s adventures are set against the backdrop of current day inequities between the Third World and Western Europe, between whites and browns and blacks. We are audience to child sexploitation, ethnic cleansing, excessive police force, the plight of refugees, the indifference of authority, emigration, immigration…a long list of real world maladies. But none of these powerful topics is pursued and developed. Problems are bemoaned, then used for comedic purpose rather than exploring potential solutions. This leaves the reader feeling like nothing is amiss in the world, not really. Everything is okay in the end, as long as we live with a smile on our faces.

The author also intersperses near-real people amidst his fantasy characters in a way that is bothersome and serves no purpose. To cite just one example, the book includes a character named Mick Jagger-Couture. Is this the real Mick Jagger? Maybe. He exhibits similar behaviors and affectations. But he has red hair, and no one else seems to take notice of him as a legendary rock star. Ultimately, it doesn’t matter, because this is just a cameo. We are immediately moved on to other matters and Mick Jagger-Couture is immediately forgotten and never mentioned again. So what was the point of that? What was the joke?

The Extraordinary Journey has great production value. The design is by the masterful Chip Kidd, and the book comes in a small but thick package with a fairly large font, making it literally a quick page-turner. This book will undoubtedly make wide rounds amongst the public. But much like an Ikea wardrobe, what comes out of the package is fairly generic. This is a story aimed at the broader audience: people who want an easy read full of light humor and a feel-good storyline. Those who are actually interested in the deeper issues presented here will be less satisfied, as those notions are exploited to lend the book a gravity that it makes no effort to embrace and examine.