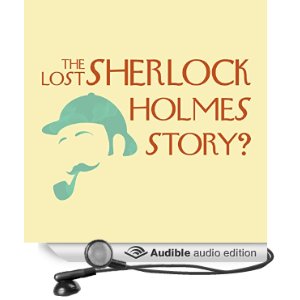 Clean out your attic once in a while, you never know what you will find. Walter Elliot, a Scottish historian, found a previously unpublished Sherlock Holmes story, over one hundred years old. It has now been made available for free online, both under the sensational title of The Lost Sherlock Holmes Story as well as its original title of Sherlock Holmes: Discovering the Border Burgs and, by Deduction, the Brig Bazaar.

The title is an exact summary of the story, and nearly as long. This is a short story in the truest sense of the word, with the audiobook version being only six minutes long. It begins with a curious device: an editor asks his journalist to interview Sherlock Holmes in order to boost magazine sales, but refuses to actually pay for his writer to travel to London. “Are you not aware that all journalists are supposed to be qualified members of the Institute of Fiction, and to be qualified to make use of the Faculty of Imagination?” he says, leaving his journalist to imagine what it might be like to walk into Baker Street unannounced, interrupting a conversation between Watson and Holmes. This is a brilliant framing device that serves as a commentary on journalism while also framing the entire story as fiction within fiction. With a nod and a wink, the author (some contest whether it was actually Doyle) seems to be saying “this is a Sherlock and Watson as I imagine you, the public, imagine them.” It subtly draws our attention to the fact that sometimes fictional characters grow beyond the author’s control, gaining new life through readers—something that has been made even more relevant in the modern age of fan fiction.

The conversation itself is fairly pedestrian, an example of Sherlock’s deductive reasoning as he figures out Watson’s vacation plans, to the latter’s bemused astonishment. Beneath this, though, is an intriguing meta-story. Watson is traveling to Selkirk, in order to preside over a fundraiser to rebuild a local bridge that had been destroyed in a flood the year before. The meta-story here is that this is the same fundraiser that this tale was written for, in real life presided over by Arthur Conan Doyle, for whom the bridge was a favorite landmark (and also because he was in the middle of an ultimately unsuccessful political campaign on the region).

Doyle was such an admirer of his time period and society that it was rare for a Sherlock story to pass by without some commentary on it, and this tale is no different. Selkirk and the surrounding area is given a loving and passionate description that bridges the gap between our time period and the Victorian era. The effect is made stronger by audiobook regular Simon Vance, whose voice is eminently appropriate for the setting. He is able to affect both the curt intelligence of Holmes and the flummoxed stammer of Watson in a way that is not so much caricature as it is good theater.

It is a testament to the appeal of Doyle’s characters that a story about Watson’s vacation plans will leave you wanting more, and wishing that the lost story was a little more substantial. People to whom Sherlock Holmes is an obsession will find this a surprisingly meaningful little diversion back into his world. The less esoteric reader may consider it more pointless, but the brief glimpse it offers into Victorian politics is still intriguing, and no one could ask for better companions on the trip.