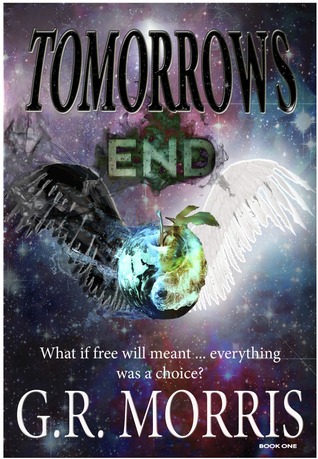 What if reality really did not exist? What if our existence was governed by shape-shifting aliens and advanced technology? Enter the Timeweb, a supercomputer able to influence every decision, control every outcome, and know all. In the hands of Robert, a “double-agent” alien, the Timeweb is used to save the universe, meaning the humans, from an alien invasion literally from Hell. While Hell is about to break loose, 16-year-old Kevin Knight remains unaware of his predestined position as the “Savior” of the humans, at least until he lands in prison. There, Kevin is rescued by Robert and informed of his crucial role in the preservation of the human race. Eventually, Kevin begins his battle against the demonic aliens with the help of Robert. Intertwined with his story is Daren, a girl born with godly gifts, fated either to be a great hero or a devastating ally of Hell. Will Kevin be able to prevent the end of days and, more importantly, tomorrow’s end?

At first glance, Tomorrows End seems to be a traditional archetype of the battle between the forces of good and the forces of evil. It quickly moves past that archetype, however, and provides an interesting narrative of the ideas of reality and destiny or free will. Tomorrows End questions the initial appearance of reality, both of the universe and of people in general. Another theme presented in this novel is the idea of destiny versus free will; the idea of the Timeweb, a god figure, controlling the motions of the universe challenges contemporary thought about humans having free will. During the course of the novel, Kevin’s ability to choose his outcome comes into conflict with his “predestined” outcome created by the Timeweb. Kevin’s tribulations present the reader with a question: Does free will exist in reality? But beyond the philosophical questions lies a novel packed with alien battle scenes and near-constant humor. Overall, Tomorrows End is more than just a science fiction novel; it’s a thought-provoking and action-filled narrative. However, detracting from the accessibility of the plot to readers is the disjointed storyline – following the rapid changes in setting, the immense number of characters, and the disjointed timeline proves to be a rather difficult task. While it is understandable that time has to flow freely in any direction because of the nature of the novel’s topic, a greater effort could have been made to distinguish changes in setting and time. At certain times, the characters seem too ideal and unrealistic to be considered accessible by the reader.

Tomorrows End not only presents an interesting science fiction, apocalyptic world but also leaves the reader with a question that will remain unanswered until, perhaps, the next installment in the series: Will the forces of good overcome the forces of evil as expected? A science fiction tale testing the boundaries of reality and free will, this novel promises a thought-provoking read hidden in a space odyssey that spans all time until tomorrow’s end.