We Regret to Inform You: Stories by Tim Fredrick 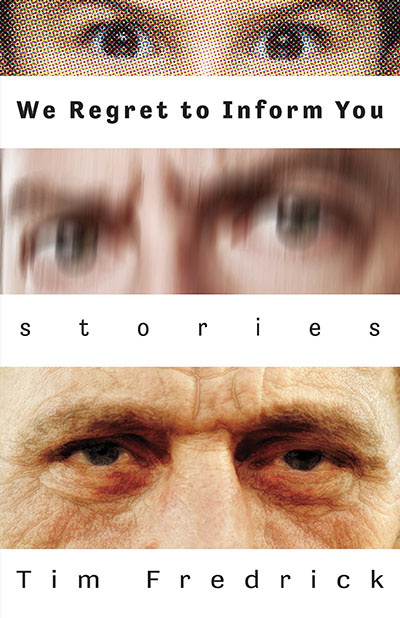 We Regret to Inform You: Stories is a compilation of short stories written by Tim Fredrick. The stories, while varying in tone and style, tend to focus on relationships shared between people. Some tell of the reunion of lost love, others about the deterioration of found love, while many focus on familial bonds, especially those between brothers. Fredrick examines the awkwardness of reaching out to others, while embracing the fact that, sometimes, relationships crumble. The stories are short, occasionally sweet, and drive Fredrick’s messages home completely.

We Regret to Inform You doesn’t try to wow its readers with pretentious vocabulary or overdone metaphors, which ends up being a nice touch to the compilation. Stories are often straight and to the point, which at times rushes the text, but as a whole makes for an enjoyable read. There are little details woven into each page that are just so delectable. It’s not an easy feat to conjure characters on a page and make readers feel as if they’ve known these fictitious beings all their lives; Fredrick does it without even breaking a sweat. The dialogue is written in such a manner that the audience wil l have no problem imagining the words spilling out of an actual person’s mouth. The only crucial problems are that most of the endings don’t receive the well -timed punch they deserve; they sort of just teeter off disappointingly. Also, while it is refreshing to have so many first person narratives from the point of view of gay men, it was a little disheartening that not only was there not a single female point of view given, there were hardly any distinct, important female characters in any of the stories.

A couple of the chapters in We Regret to Inform You are odd and maybe don’t fully succeed in their purpose. The chapter “My Right Armpit Sweats More Than My Left One” is awkward, and “Plaything” is told from the point of view of a catnip toy mouse, w hich feels like some distinct metaphor, possibly incestuous, that is impossible to decipher. Fredrick can be commended, to say the least, for his experimentation of different forms of storyt elling. His first chapter, “By the Stream on Moving Day,” is told in a normal first person narrative, whereas the following chapter, “This One Night in the Bar Where I Work,” is told in first person in one long run on sentence that goes on for four pages without any paragraph breaks. The chapter “We Regret to Inform You” is written in the form of a letter and, while possessing little finesse, is particularly hilarious. Fredri ck shines in “The Cat, On Snow,” “By the Stream on Moving Day ,” “Dusting,” and “A Tale of Five Thousand Erections,” which is a humorous, but oddly sweet take on a young man’s journey in realizing his sexual orientation.

As a whole, We Regret to Inform You is a delightful and quick journey. Readers will not regret any of this information.