All Joy and No Fun: The Paradox of Modern Parenthood by Jennifer Senior 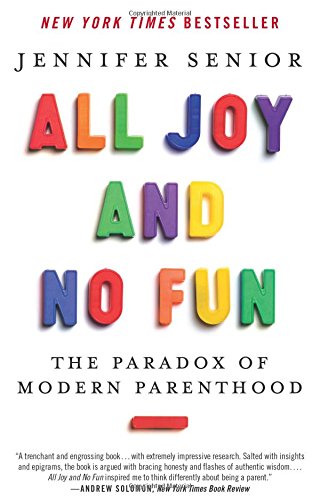 In the movies, a positive result of a pregnancy test is most always greeted with cries of joy, as in the title of this fine book. After reading it, the joy might be tempered with thoughts of: Oh boy, what have we gotten ourselves into? Even just the introduction is a must read, a cautionary tale for anyone contemplating parenthood.

Ms. Senior is a contributing editor at New York Magazine. All Joy and No Fun is her first book, and it’s really good. The book is very readable. Partly serious and partly humorous, she uses a full slate of tools to inform the prospective parent and give some understanding of what happened to those who have gone or are going through the process. She uses interviews with parents, scientific references, and, to prove her own bona fides, her experience as a parent herself. In other words, she’s not just winging it, there’s real meat here.

The book briefly describes parenthood from before it was even a word. Parenthood, as we know it, started after World War II, with the switch from an agrarian to an industrial society, with more people moving from the farms into the factories, and many women from the house into outside employment. This meant that the template for raising children changed, and there is was no new template to replace it. We’re still searching for one today. Also, there is more at stake: previously, the children worked from an early age and contributed to the family. Now, there is essentially no way to do that and so the successes and rewards of parenting are pushed into the future with unsure result.

The book follows along developmental stages from birth, which is characterized by exhaustion, to toddlerhood, characterized by extended and frequent bargaining sessions, to school age which is a bit easier since the chore is shared with others, and adolescence, where the parent has to juggle from advisor, to warden, to parole officer as needed.

And, while this is going on, changes in your marriage and relationships are happening all the time and they can be serious and bewildering. As a father of four, I can say that this is true, but there are rewards. Its not unremitting hardship, and we can regain some equilibrium when the nest empties. This is the conclusion reached by the author as well.

The last two chapters are dedicated to removing some of the doubts raised by the previous sections, in effect covering the joy part. It’s a little fuzzier than the rest of the book; I suppose, because, while we are all affected by uncertainty and stress in similar ways, I think the components of satisfaction might be more elusive.

In any case, everyone can benefit from this book. Preferably before taking the plunge.