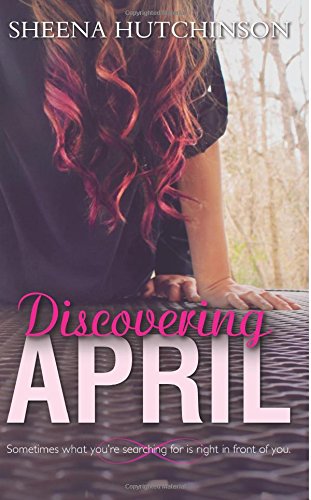 Looking for a sweet, fun, heartwarming new adult contemporary romance? This is it! Discovering April by Sheena Hutchinson is a delightful new adult romance written from the first person POV of the female lead, in mostly present tense. Hutchinson’s winning writing style makes this an easy book to fall for.

April’s story took a while to get going for me. I wasn’t a fan of her character at first. Her on and off again relationship with Hunter was really frustrating, and I kept wanting her to wake up and realize how destructive it was for her. Her tendencies for overreaction and for frequent hysterics were also a bit off-putting. Then Jared showed up, and when he started to help her find herself, I started liking her. When Jared and April worked on getting her old confidence back, April began redeeming herself in my eyes. I loved that Jared was helping her find out who she was, something with which many young adults can definitely identify. I would have loved to see his character fleshed out a bit more, but I found him warm, caring, incredibly patient, and genuine.

Nearing the halfway point, I felt that it was a fairly predictable story of falling for the childhood crush next door, and I had a few concerns for what would take up the rest of the book. Then I was blindsided. The plot suddenly punched me in the gut, and I was tearing up, falling for Jared just like April, and very much invested in their future. What started as a slow and fairly smooth ride for April and Jared suddenly got turned upside down, and I was hooked until the very end. The climax, I might add, floored me. I won’t give it away, but it hit me right in the feels. Some readers might find it a bit over the top, but I felt like it made sense in context with April’s dramatic nature. She was dramatic about little things, and then some real drama came along.

There was definitely a turning point when I felt my heart start melting for Jared. Not a man of many words, he always was honest and said just the right things. My favorite swoon-worthy comment of his was when April was confused as to why men would be chivalrous, as it seemed like an insult.

“Chivalrous acts are done as a sign of respect to you. Men, real men, that is, do these things for women not because we have to, but because we feel they deserve to be honored in some small, tiny way every single day.”
Who wouldn’t love to hear their SO say something like that? Jared repeatedly made this book for me. Every time April had a breakdown, Jared was there with an offer of adventure, love, and support. April is one lucky girl, for sure!

I would dearly love to discuss the ending here, but I don’t want to give anything away, so suffice it to say that despite its slow start, Discovering April is a truly heartwarming and fun read. I laughed, cried, and had a wonderful time. I look forward to future books from Ms. Hutchinson, and am eager to read the books about Sera, who also shows up in April’s story. A solid new adult contemporary romance.