Etta and Otto and Russell and James by Emma Hooper 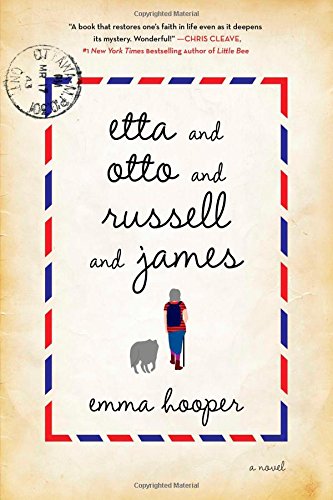 This book alternates between the present day, when Otto and Etta are well into their eighties, and the time period in which they met when they were teenagers. Otto Vogel does not get a lot of special attention because he comes from a family of fifteen children that live on a farm in rural Saskatchewan. There are so many children around that Russell, a neighbor of the Vogel family slips in at dinner one day and becomes the honorary 16th member of the family. Russell plays with the Vogel children, eats with the family and does a fair share of chores on their farm and Otto and Russell grow up being as close as brothers.

Otto so desperately wants to get away from his small town so, against the wishes of his mother, he joins the army and is shipped to Europe when World War II breaks out. While Otto is in the war he keeps up a beautiful correspondence with the teacher at his hometown’s local school whose name is Etta. Through their letters they fall in love and when Otto gets back to Canada they marry and have a long and happy life together. Russell, who lives next door, becomes just as good friends with Etta as he has been with Otto. The writing style of the novel is very curt and direct, and mimics the simplicity of the characters themselves.

A large part of the story deals with Etta who, when she turns 83, is developing alzheimers. Etta decides that she has never seen the ocean and decides to walk from Manitoba to Halifax and says goodbye to Otto and Russell with a note. Along the way she meets a coyote named James who becomes her loyal traveling companion. For the first time in their lives, Etta, Otto, and Russell each pursue separate paths. Etta walks for months towards the east, Otto stays at home making paper mache animals and Russell goes up north in search of wildlife.

Although they have been together for their entire lives, it seems that the more they are apart, the more Etta, Otto and Russell lose themselves and their identities. They each feel compelled to pursue separate goals at the end of their lives, but can they ever really break the strong ties that have held them together for so many years?

This is a heart-warming story of family, love, memory and personal identity. Etta and Otto and Russell and James is a quick and easy read, but one that will resonate in your heart and memory for a long time to come.