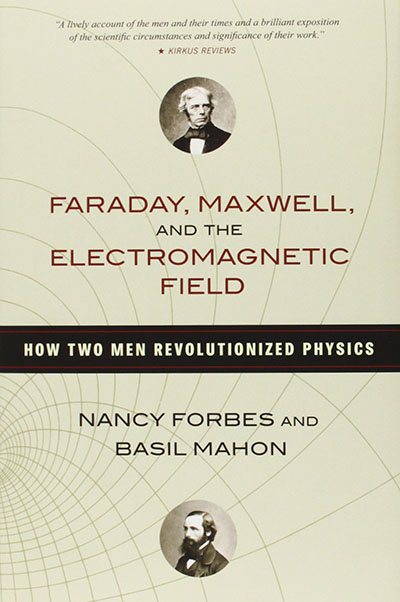 A dual biography and lesson in electromagnetism in one, Faraday, Maxwell, and the Electromagnetic Field by science writer Nancy Forbes and engineer Basil Mahon is a history of science for the general reader, but is chock full of enough detail for both the historian or scientist. The goal of the book is to show how two giants of nineteenth-century science argued against the status quo and figured out a mystery of science in their time. But scientific discoveries do not occur in a vacuum, nor do they occur overnight. They are the result of lives lived and years of work. The two physicists discussed here are worthy subjects to read about on their own right, yet when their careers are combined the result is a book that shows the contingent nature of work in science. Maxwell surely stood on the shoulders of a giant (Faraday), as the oft-used quote from the history of science goes. And today, humans take for granted that much of the technology we use, such as wireless communications, stems from Faraday and Maxwell’s discoveries so long ago. While the first section of the book deals with Faraday’s path and the second with Maxwell’s, the book is filled throughout with the authors’ explanations of the physics being discussed, with plenty of helpful diagrams. Faraday, Maxwell, and the Electromagnetic Field is an engaging read for anyone interested in history or science.