Icarus Falling: The True Story of a Nightclub Bouncer Who Wanted to Be a Fucking Movie Star But Settled for Being a Fucking Man by Christopher Meyer 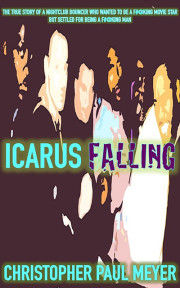 A vulgar and cumbersome book title apparently does not always translate into a rambling ribald book; on the contrary, Christopher Meyer’s Icarus Falling: The True Story of a Nightclub Bouncer Who Wanted to Be a Fucking Movie Star But Settled for Being a Fucking Man is a forceful book ripe with detail and well-defined characters, while also heavy on the melodrama and corniness.

The book and lead character are based on the author’s real life experiences. Meyer is a native New Yorker in Los Angeles struggling to make it as an actor while barely scraping together a living. While hopping from job to job Meyer stumbles across a life-changing job as a bouncer at a popular nightspot. Violence, sex, and Hollywood drama emerge as secondary characters as Meyer endures the realities of tossing drunks, prostitutes, and all manner of riff raff out on their butts. Job changes inevitably occur and eventually Meyer’s experiences with handling disruptive and obnoxious club patrons leads him to a not entirely surprising place.

The cheesy factor runs rampant throughout the story, with corny comments overtaking the story at times. Some of the writing tends to be obvious and unnecessary to the story, almost as if Meyer is trying to pound certain ideas home through relentless repetition, while other lines are overwritten and sometimes confusing. Blatant foreshadowing is also an all too frequent contributor.

One of the most frustrating aspects of Meyer’s prose is the mixture of lucid description and detail with writing that feels forced and directed at impressing or shocking the reader. Vulgarity for vulgarities sake is not the most compelling route an author can take when trying to make a point.

The story by and large charges forward and consistently kept me interested, despite the many unnecessary tidbits of information and overarching inflammatory corniness. The in your face writing style also makes for a fast read, and the detailed and unique world of bouncing at a well-known L.A. club creates a compelling story.

Andrew Smyth graduated from the small but indomitable Pitzer College with a degree in English and World Literature and an emphasis in creative writing. As a ghostwriter, reviewer, and blogger he has traversed the online writing life for the past decade, and found it vast, serendipitous, and frequently bizarre. Presently he finds himself surrounded by women (namely his wife and young daughter) and music, as part of his grand plan to become an internationally known DJ.
You might also like

by Don Messerschmidt on April 22, 2019
Paulo Coelho, the internationally popular Brazilian writer, has published 18 books to date ― fiction, non-fiction, and occasionally a mix of both. His most popular titles include The Alchemist, Pilgrimage, Adultery, and a novel entitled Spy. [...]
Comments
Leave a reply