It’s A Long Story: My Life by Willie Nelson with David Ritz 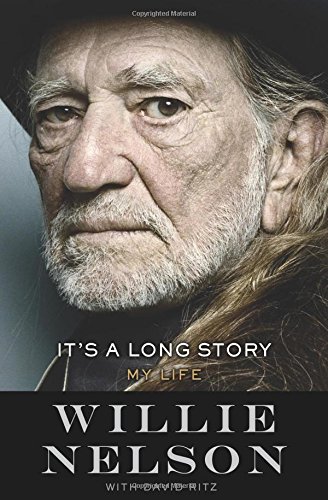 Willie Nelson, Bob Dylan, and the recently deceased B. B. King represent the last generation of troubadours, touring relentlessly on their buses. These days, Willie is the senior member of the fraternity, and this book recounts his long and colorful life story. Some of the anecdotes are so good that the reader almost wishes that the book was entirely devoted to them. For example, the tale of Ray Charles defeating Willie at chess by playing in an unlit room with the pieces marked in braille.

The book begins in the early 1990s, with Willie fighting with the IRS over unfiled taxes and disputed tax shelters. From time to time, the narrative returns to that unhappy subject. Yet Willie remains relatively cheerful throughout that ordeal, as he apparently always is. Abandoned by his father and mother, he has nary a bad word to say about them. Willie was raised with his sister Bobbie by his grandparents, and the siblings find their way in the world through the magic elixir of music. Willie endured long stretches of poverty, two conflict-ridden marriages, and was generally misunderstood by the Nashville establishment. As the story unfolds, record producer Chet Atkins repeatedly tries to dress Willie up in urban sophisticated musical settings, to little perceptible public response.

Somehow, there is a silver lining. Willie is mentored by songwriters Mae Axton and Hank Cochran, and his songs get recorded by famous Nashville artists. Record producer Jerry Wexler helps him find success as a recording artist by letting him be himself, with minimal studio embellishments. As Willie and David Ritz tell the story, marijuana succeeds alcohol as his drug of choice, and this becomes a lifelong necessity.

Further tales invoke his third and fourth and final long-term marriages, as well as Willie’s involvement in producing musical benefits for small farmers. It all makes for easy reading. The reader may wish for more insight from the authors, however. Why didn’t he offer more resistance to Atkin’s numerous attempts to control his music? It would have been interesting to read more details about Neil Reshen, the manager who was largely responsible for the problems with the IRS. The author seems undisturbed by how the current music industry has resulted in a substantial loss of revenue from recording and songwriting, maintaining that he has always relied on performing music as his financial anchor. This overlooks the lucrative royalties that he must continue to enjoy from the airplay of his songs and his formerly million-selling albums. Is it marijuana, or Willie’s generally good-natured attitude, that leads him to virtually always keep it on the positive side?