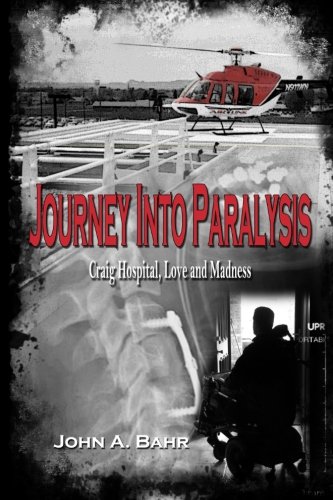 It’s commonplace for humans to take for granted certain aspects of their lives. It’s easy to get wrapped up in the little things – a bad day at the office, a large heating bill, a stubbed toe – but people often forget to be thankful for the roof over their heads, having a job when unemployment is so high, and their healthy bodies. Some don’t think about how quickly everything can change in the blink of an eye, be it a house fire, losing work due to downsizing, or even a motorcycle crash.

Journey Into Paralysis: Craig Hospital, Love and Madness is a memoir written by John Bahr, retelling the first months he experienced after being diagnosed with paralysis. Bahr reminisces about his younger days, when riding motorcycles was one of his biggest passions, and how even several near-fatal accidents didn’t stop him from racing with friends. Unfortunately, the tale turns grim when Bahr missed a jump and was thrown off his bike, leaving his body almost completely paralyzed. Journey Into Paralysis focuses heavily on John’s first four months spent in Craig Hospital, where he recovered some mobility above the waist and started learning to live as a quadriplegic. While this memoir might leave readers frightened by the thought of becoming paralyzed, Bahr focuses on the good of his experience. He writes about all the people he met during his time at Craig, the friends and family who persistently stayed by his side, and how he learned to appreciate life better throughout the aftermath of his accident. It’s an uplifting story with a happy ending, to say the least.

While a heartfelt story, it is apparent while reading Journey Into Paralysis that Bahr is a novice author. It’s an admirable first stab at crafting a memoir, but the book lacks finesse and some much-needed editing. A lot of information is repeated time and time again, and while details that could have helped flesh out the story and make the language flow better are certainly there, they’re all laid out bluntly and told without any effort. The book reads as if it is Bahr’s own personal diary: personal and detailed, but without much effort put into fine-tuning the writing.

Although Bahr may have further to go as a writer, his story has a lot of heart. He enthusiastically writes about all the wonderful people in his life and the good they have done in helping him. Even the people who hurt him or let him down in times of need are not berated or belittled; more often than not Bahr explains how, while what they did at the time may not have been right, he understands their sides of the story. Bhar obviously has a large heart and cares deeply for people, and he’s ever the enthusiast when it comes to seeing the bright side of things, making almost every page of the story endearingly sweet. Not to mention he cracks jokes left and right, and though not every joke is a home run, it brightens up the story nonetheless.