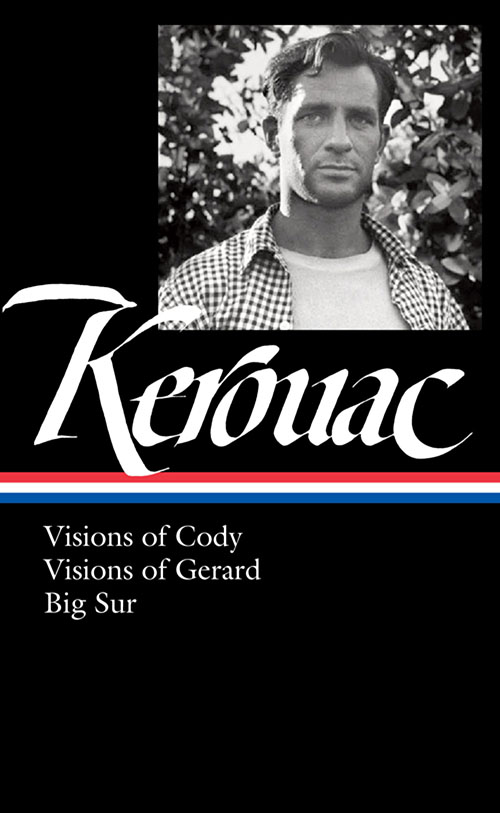 Library of America has released another volume collecting the works of Kerouac and I remain uncertain as to how I feel about it. The reason for my ambivalence is this: when I think of Kerouac, I think of those tattered copies that have survived countless trips in backpacks—spines broken from constant rereading while waiting for that next bus to arrive—I do not think of beautiful editions read with care, sitting proudly on a shelf lacking a speck of dust. And that’s what this Library of America edition is: beautiful—worthy of care—just like everything that the Library of America puts out with which I love to fill my shelves. The works of Kerouac are beloved and important to American Literature, and for that, definitely deserve to be added to the collection along with the other great and important writers. This particular collection houses three of the later works of this great Beat Generation writer: Visions of Cody, Visions of Gerard, and Big Sur. Library of America’s previous collections contained his earlier road novels—including that perennial classic, On the Road—as well as his poetry. But this is Kerouac! I feel almost sacrilegious adding some gorgeous copy to the collection, like I am being disingenuous to the nature of the words held within—for this is not an edition with which to travel on the road, but to treasure in the comfort of your home.

As for the books contained within this most recent volume, I personally maintain reservations as to their literary merit. There is a charm to Kerouac’s prose that appeals to me as one who admires that passionate stringing-together of nacreous words to make a fetching sentence, but it can appear as a gaudy necklace does on an urchin when these sentences are not in support of a clear narrative. Kerouac is superb at describing places and people, showing the gritty truth of them while also giving them meaning beyond plain perception—that is the boon of his stream-of-consciousness style. But there is a lack of cohesion that infuriates me as a reader. In Kerouac’s style, people and places amount to amusing anecdotes and nothing more. His relationships appear deep and troubled, but this is the illusion of a shallow pool made murky by the violent thrashing of words. Kerouac’s works are, nevertheless, vivacious tableaux of sensual perspective that spark the fire of life into the static and mundane—but just for a moment. This is the genius of Kerouac. But in these moments of life, I ask: is the whole portrait lost? Does he sacrifice whole lives and relationships so that characters can be brought to life for just a single sentence? Is a person merely a collection of his or her scattered experiences, or something more? Kerouac and I may disagree on the answers to these questions.

Visions of Cody consists of a series of vignettes as told by Jack Duluoz regarding the eponymous Cody (Neal Cassady in real life).The first part recounts people, places, and events that recall to Jack’s mind the desire to visit his friend, Cody, out in California. These people and places come alive in sight and sound and smell and touch with Kerouac’s passionate style. There is a great longing that the reader feels as Jack’s mind connects Cody to seemingly disparate notions and places at the slightest provocation. In the second half, Jack finally decides to visit Cody, and the audience is presented with something of a transcript of their days together—recalling together stories of acquaintances and the like just as friends do. In the end, it is a book about friendship—how the moments and memories of a friendship inform our lives and our relationships with people and places. But the relationship between Jack and Cody is strained by the end of the book, so that, when you look at the whole picture, perhaps their relationship is not actually as beautiful as the separate moments of which it consists (suggesting, perhaps, that our relationship with America, so often paired in the text to Cody, is the same way).

Visions of Gerard acts in much the same way as Cody, but relates to Jack’s brother, Gerard, who has died at the age of nine. The book is like a codex of Jack’s memory, making firm those ephemeral thoughts of childhood that so inform our adult lives. Jack regards childhood with reverence, looking back at Gerard’s innocence as nearing holy. It is beautiful and lyrical and sad all at the same time—much like life itself.

Finally, this collection concludes with Big Sur, recounting Jack’s visits to Big Sur in an attempt to find refuge from the stresses of city life and alcoholism. But Jack also fails to deal with the isolation of life in the country, and so always eagerly returns to the stresses of the city. Cody appears in this novel as well, as if Jack were unable to survive without this presence in his life. Jack appears to have no place to escape the suffering of existence, caught between expectation and disappointment—at least until a magic moment with his friends comes to relieve the pain for a short time.

Overall, I do not know what standard by which to rate this edition of Kerouac. I can base my final analysis on the merits of Kerouac’s novels or on physical edition itself (for it is finely bound and a beautiful edition to any library). Either way, I leave something out, so I will ultimately conflate both methods. As for Kerouac’s prose, I find its lack of cohesion more of a hindrance than a boon, his stories so filled with hedonistic, selfish characters that I could hardly abide them. True, Visions of Gerard is filled with kinder, more idealistic views of humanity, but these visions are clouded by the naive innocence of childhood. But many people love Kerouac’s novels, and this edition does not detract from that established appreciation. For those of you out there who would like a wonderful edition of these important literary works to place on your shelf—look no further. For those of you who are looking for a book to take on the road with you, to live the life that Jack lives in these books, go instead to your local used book store and pick up the most abused copies of these books you can find.