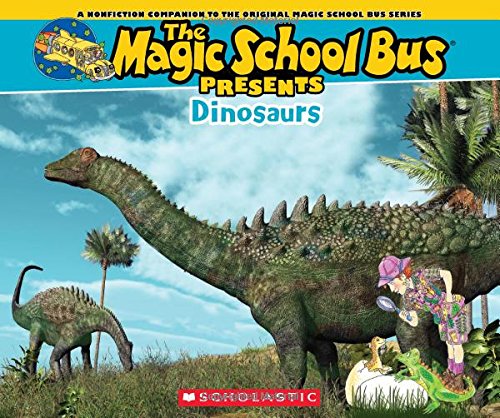 Another companion book to the original Magic School Bus series, this one covers all kinds of dinosaurs. Beginning with fossils in museums, then traveling back in time, Ms. Frizzle’s class learns what dinosaurs looked like, ate, how they moved, what caused their extinction, and how we know so much about creatures who lived hundreds of millions of years ago. At the end of the book, the class learns about paleontologists and others who make their careers studying dinosaurs, which will surely spark some child readers to change their answers to the question of what to be when they grow up.

Although this book has the same characters we came to love from the original Magic School Bus books – and the same wildly printed Ms. Frizzle dresses – there isn’t as much of a story or sense of mission as there was in the original books. Instead, these books are more a repository of facts like a reference book, and some of the facts presented were worded in a confusing or awkward way. Of course, dinosaurs are always fun to learn about, but the book doesn’t play with the material as much as it could have.

The highlights of the book are the digitally created images of dinosaurs. Most pages in the book are full-page spreads of beautifully rendered, nearly photorealistic images of dinosaurs in their natural surroundings, with their scales, colors, and even feathers shown in minute detail. The art adds an extra dimension of wonder to a book that is otherwise somewhat lacking in interest.