Mah Jongg: The Art of the Game: A Collector’s Guide to Mah Jongg Tiles and Sets by Ann M. Israel and Gregg Swain, photographs by Michel Arnaud 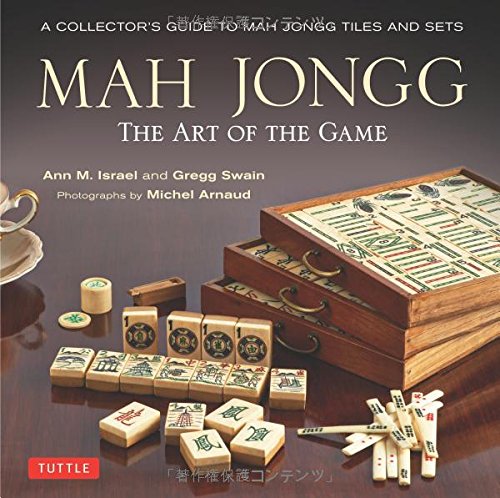 If you’ve ever played the game “Taipei” on an old Windows computer, or any other Mah Jongg computer program, you’ll be familiar with this game and its pieces as shown in this book: the tiny tiles with their images of bamboo rods, Chinese numbers, and representations of the four winds.

But in this book, you will also learn about the history of Mah Jongg, why it became popular in the West, and the different variations in how to play and types of game pieces. Did you know that the game originally only had numerical tiles in suits called “cash,” “strings of cash,” and “myriads of cash,” and that the flowers, dragons, and seasonal tiles were added in the 1900s? Or that the first Mah Jongg sets were imported to America in 1920 by Joseph Babcock, a Standard Oil Company representative working in Suchow, China, who happened to fall in love with the game and sparked a craze for it in the U.S. when he brought it over?

The authors are connoisseurs of Mah Jongg, and it shows. They detail examples of collectible sets throughout the years, made of ivory, bakelite, porcelain, or bamboo, as well as describing the differences in tile design, tile layout, and game packaging.

Arnaud’s photographs of the game sets are nothing short of stunning, and these alone make the book worth picking up. Many of the tile sets pictured in the book are truly works of art, and the photos capture the minute details of the elaborate pictures on the tiles. Even if you don’t have strong feelings about the game of Mah Jongg, if you’re at all interested in Asian art or antiques, this is the coffee table book you never knew you always wanted.