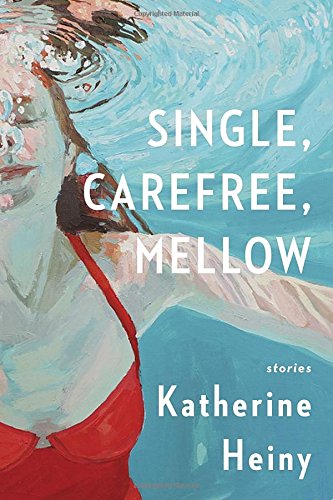 Katherine Heiny’s Single, Carefree, Mellow is a cutting book of stories about people searching for human connection in all the wrong places. The threads that tie these stories together are infidelity, disconnection, and the type of ennui that plagues characters whose problems run about as hot as living without air conditioning, the death of a four-legged friend, or the illicit affairs that haunt nearly every heroine in the collection.

None of the stories stray too far from each other thematically, and most read like R rated Friends episodes. Heiny has an impeccable ear for dialogue and a sparkling crystalline prose, complete with a calculated humor that leaps off the page in all the right spots.

One story that bubbled to the top was “The Rhett Butlers.” Heiny pulls the reader into the mind of a seventeen-year old girl who is carrying on an illicit affair with her history teacher, Mr. Eagleton. This vulnerable narrator is sealed off in her secret affair, striving to understand her relationship with Mr. Eagleton and the broader world they are forced to inhabit. After he shows her a porn film she muses “you are young enough to still have your parents always in the back of your mind, and you are heartbroken to think that your mother lives in a world where such films exist.” The narrator lives in that vulnerable space between childhood and adulthood, and like most of the characters throughout the collection, a seeming lack of emotional depth is deferred to a keen sense of heartbreakingly hilarious detail.

No one in Single, Carefree, Mellow is anything like the title suggests, mainly because these characters inhabit that point of conflict between their own expectations and choices and the constraint of what is expected of them, either by the people around them or by broader societal standards. Heiny elevates the mundane to the magical in her characters’ strivings for connection. This is a highly readable book.