The Octopuppy by Martin McKenna 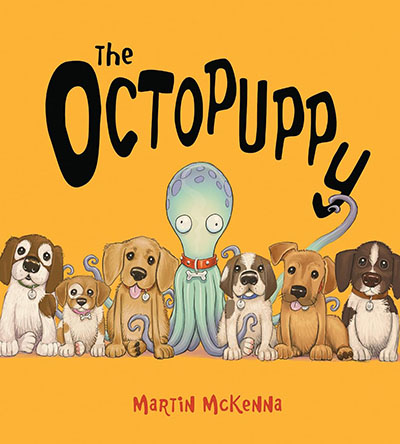 In Martin McKenna’s The Octopuppy, young Edgar dreams of having a dog. However, he is gifted a pet octopus instead! Edgar is not quite willing to give up on his dream and makes every effort to train Jarvis to behave like a dog. Jarvis is very intelligent, and tends to follow commands in his own unique way, much to Edgar’s chagrin. Eventually deciding he is a failure at being a dog, Jarvis runs away. It takes Jarvis’ absence to strike home to Edgar that Jarvis was not a dog, and Edgar should not have been trying to make him behave like one. Edgar begins searching all over for Jarvis, but will Jarvis hear his heartfelt apology?

The book is colorful, and has very cute illustrations that children and adults will fall in love with. There is some surprisingly morbid humor tucked inside the images as well that children will likely not notice, but may cause a chuckle from adults. For example, when Jarvis runs away he flushes himself down a toilet – something typically reserved for disposing of waste and the occasional fish funeral – and even leaves behind a farewell note. There is also a scene during Edgar’s search for Jarvis where he holds up a missing poster to a butcher standing in front of a pile of fish.

An incredibly quirky children’s book, The Octopuppy teaches children the importance of respecting the uniqueness of others, and that it isn’t always a bad thing to not have your expectations met. If you didn’t think cephalopods were cute before, The Octopuppy may change your mind!