The Pharaoh’s Daughter by Mesu Andrews 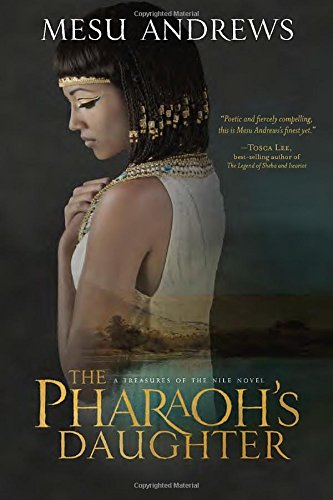 The Pharaoh’s Daughter is the story of Anippe, an Egyptian princess. She is one of the sisters of the prince, Tut. At the very young age of five, she had witnessed the death of her mother and sibling during childbirth, and this memory has haunted and terrified her throughout her young life. She has prayed to the Egyptian Gods to keep her safe and free from any pregnancy. Upon the death of her father, Tut became Pharaoh, and Anippe is taken to be raised by one of King Tut’s generals and his wife. She grows to love the General and his wife like family. Anippe hopes for no real worries in her life other then her own annoying younger sister. But her peaceful existence takes a turn for the worst when the general returns from battle and brings a young warrior with him. She is told that she will have to marry him, at the tender age of 14, for the protection of Egypt’s Two Lands. Her childhood childbirth memories resurface and she is terrified once again. She asks for help from one of her slaves, to find a midwife. She had heard there were herbal mixtures to use to stave off unwanted pregnancies. As the months pass, she realizes that her husband is a kind and good man and that she loves him. She again deceives her husband when she presents him with a baby son upon his return from a long battle. This baby had been found floating down the river Nile by her slave. She wonders if, through her deception, her son of Hebrew parents could become King of Egypt.

The author, Mesu Andrews, shows a complete historical and biblical graph to help the reader understand the story. This graph is incredibly informational and adds a great dynamic companion to the tale. Each chapter begins with a verse from the Bible, framing the coming chapter of the story. She brings the biblical story of Moses alive with plausible possibilities, hypothesizing ways in which the story may have happed according to the historical time period. Her vivid descriptions of daily life of the Hebrew slaves were well researched and add an element of realism. The dialogue between her characters flowed easily and each chapter blended well into the next. This book is a well-written, historical fiction for the religious persons looking for a good and quick read.