Voltaire’s Revolution: Writings from His Campaign to Free Laws from Religion by G.K. Noyer 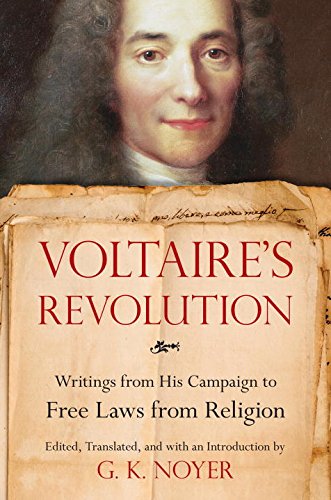 This Bastille Day, July 14, 2015, Voltaire’s Revolution: Writings from His Campaign to Free Laws from Religion will be, fittingly, released for sale by Prometheus Books. Voltaire, the pen name for François-Marie Arouet is best known in the US for his satirical novel Candide, but this is just one work among hundreds that influenced the Age of Enlightenment by calling for the separation of church and state.

“When we hear of Voltaire at all in America, it is generally as the author of Candide, invariably hailed as his masterpiece. All the rest we are assured is dépassé, out-dated, besides perhaps a few other short stories. But most of the civilized world from his day to our own would vehemently disagree.”

G.K. Noyer, a freelance writer and translator, has created a new translation of some of Voltaire’s work in this compilation. Luckily, each of the 20 works has a brief introduction for context. Some are still fairly dry and remote, but some are still as relevant today as when Voltaire wrote them. The dialogues are, in particular, enjoyable to read. They are witty and excellent at pointing out the fallacies of Christian logic. In addition, Noyer has written almost 50 pages on the importance of Voltaire to American founding fathers Benjamin Franklin, Thomas Jefferson, and Thomas Paine, and included nine depictions of Voltaire written primarily by contemporaries. It’s odd to read such depictions because the best way to understand and appreciate a writer is generally to analyze his works rather than his person. Since some of these works have never been translated, this is an essential book for Anglophones studying Voltaire, philosophy, and the separation of religion from government.