When Paris Went Dark: The City of Light Under German Occupation, 1940-1944 by Ronald C. Rosbottom 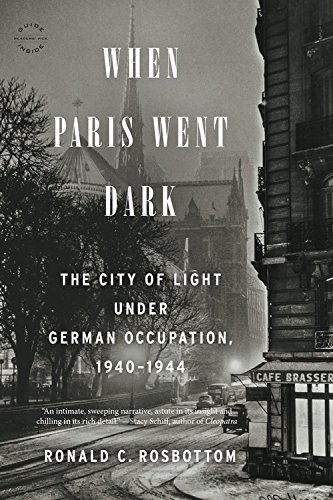 Hundreds of memoirs and biographies have been published about individuals’ lives during World War II. Following in this tradition, Ronald C. Rosbottom does not record the experiences of a person but a city in When Paris Went Dark: The City of Light Under German Occupation, 1940-1944. The opening chapter poses a question to the reader that lingers in the mind duration the duration of the book and afterward. When German soldiers overtook Paris, Parisians had to “accommodate” to Nazi occupation, but when did that accommodation turn to collaboration? After the end of the war, women accused of having sexual relations with Germans were shorn and shamed throughout the streets. However, prostitutes avoided this fate, as did merchants who sold goods and professionals, such as barbers and tailors, who sold services to the Germans.

Rosbottom takes accounts from painters, writers, Jews, Germans, French Resistance fighters, and more to put together collage of what Parisians must have gone through during the occupation. It is not a fully comprehensive collection, but for such a weighty subject it cannot be expected to be. Some stories will never be known. Others are written or should be written in other volumes. When Paris Went Dark is one voice amidst a complex conversation.