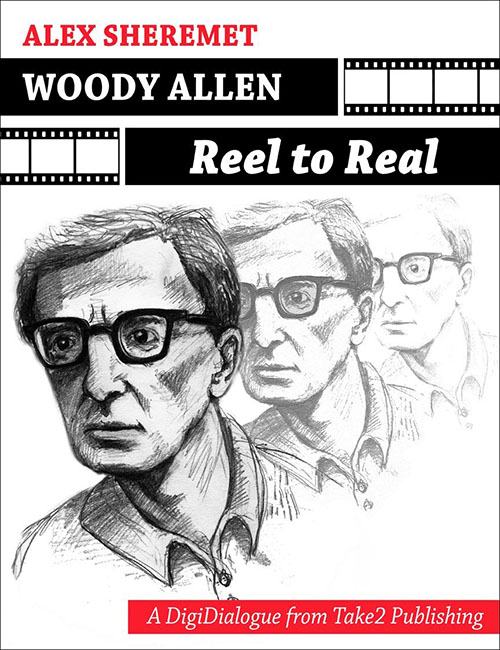 Alex Sheremet’s Woody Allen: Reel to Real is a book for Woody Allen fans, certainly, but it is also a book for people who love films and filmmaking. It is a chronology – with a few exceptions – of each Woody Allen film from What’s New Pussycat (1965) to Magic in the Moonlight (2014).

Sheremet examines each film in critical detail, conveying his opinions on where each film places in the Woody Allen pantheon and, sometimes, in the overall hierarchy of filmmaking history. He substantiates his opinions by acknowledging mainstream critics, such as Roger Ebert and Dan Schneider, but doesn’t always agree with them. Sheremet offers detailed reasons for his differences of opinion, which adds to the enjoyment of reading the book. For those who appreciate such things, the book is extensively footnoted throughout.

In many instances, Sheremet also provides detailed plot descriptions and brings home, again and again, the difference between plot and narrative. For example, in his discussion on Radio Days, he says:

“Although it’s often said that the film lacks plot, this criticism misses the fundamental difference between the words ‘narrative’ and ‘plot’, and how they apply to art. Plot is merely the happenings, not even how one gets from one point to the other, but the fact of getting there. … Narrative, on the other hand, is how all things in a given artwork cohere, whether that be music, scripting, acting, image, or the mere smash-up of events, which may or may not include a rich plot.”

This distinction fuels many of his arguments against existing critiques of Woody Allen’s work. Sheremet is never strident and always seems fair. There is a section in the back of the book that provides the means to connect to many of the critics who spent time evaluating Mr. Allen and his work. On the whole, the book is a fair and balanced presentation of opinions that don’t always jibe with Mr. Sheremet’s take on the state of the Woody Allen film collection.

This book is a tribute to filmmaking worldwide. Sure, it’s all about Woody Allen, but it encompasses all of the ancestors and progeny of Mr. Allen’s work. He is an American icon, whose work is rich in comedy, pathos, drama, and undeniable creativity. His art shows a breadth of experience and exhibits a profound contribution to the world of film. If you are a fan of movies, American cinema especially, you should seriously consider adding this labor of love to your library. It is a reference you will return to again and again.