Comeuppance: Stories from the 1960s by Michael C. Ahn 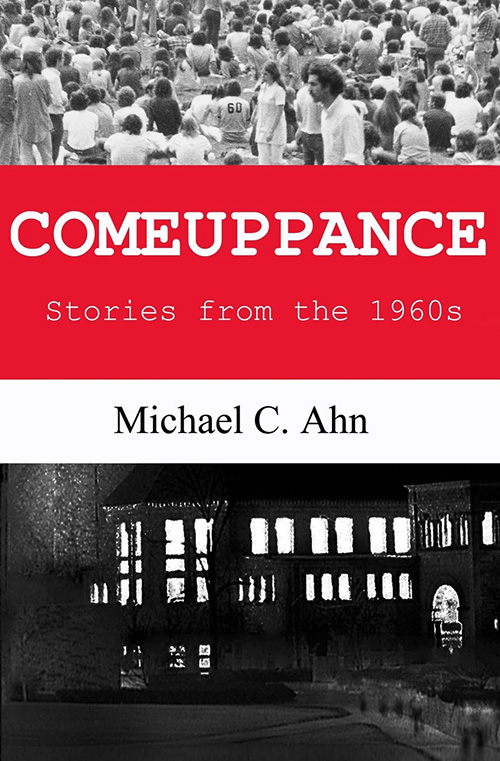 The 1960s is perhaps one of the most memorialized decades of America. It was the time of the hippies, of The Beatles, the Vietnam war, the civil rights movement, and the beginning of shifting gender roles. In this fictional compilation by Michael C. Ahn, the 1960s is revisited and remembered in a close, and personal coming of age manner. Although some of his stories have appeared in literary journals, such as “Clean Slate” in Paradise Review, Comeuppance: Stories From The 1960s is Ahn’s debut novel.

A collection of eleven stories, Comeuppance brims with an organic feel. Each story, whether it follows a disturbing genius as in “Clean Slate” or the beautiful Kay in “Photo Shot,” follows a realistic and natural development. The characters and their stories are simply written, so that each action or thought is familiar to the reader as if it could have been their own they or an acquaintance were living, loving, working, or studying in the 60s.

Ahn also brings to life the shifting social balances that the sixties were famous for, even if what he writes about wouldn’t necessarily make headline news: a romance between a soldier and a Vietnamese women, Jewish fraternities, and casual sexual encounters. In the story “Comeuppance” Ahn showcases one of these casual sexual encounters, while also examining the sexual power that women were experimenting with in the 60s: “again I signaled at her to change positions, but again she kept control and overwhelmed me like an assailant.”

Ahn writes with what he is familiar about, such as college in New York, as Ahn himself attended Cornell. This feeling of familiarity also evokes a sense of nostalgia for the reader, whether they went to college in New York or not, as Ahn is able to capture the worries and the everyday life of a college student effortlessly.

Comeuppance is a delight to read, and contains a sometimes disturbing, sometimes beautiful, but always a vivid conglomeration of seemingly real stories from the American 1960s.