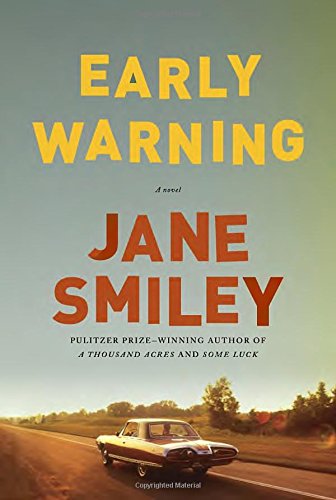 Unlike Some Luck, Early Warning is not engrossing at all. This second book of a trilogy picks up where Smiley leaves off in 1953. The Langdon family is dealing with the death of Walter, the patriarch. The family has grown in number and is as dispersed as ever. Farm life is no longer the singular focus of the family. The second book covers years 1953 through 1986. Family members deal with death, affairs, post WWII, the Cold War and even Jim Jones, of the Peoples Temple notoriety. The reader will get a sense of what life might have been like in these turbulent times as the characters try to find their place in society and their own families.

Most chapters cover several different characters which created a flow problem with the book; it really is difficult to keep track of who is who. Details are painfully laid out and this reviewer often wondered why such detail was exhausted for many rather trivial events. Nonetheless, if the reader wants to explore the general feeling of the times and enjoys following characters during their ups and downs, then plow through Early Warning knowing that no bombs will be dropped, but pain, sorrow and love (and a few secrets) will be revealed in this expansive book.