F*ck You, I’m Irish: Why We Irish Are Awesome by Rashers Tierney 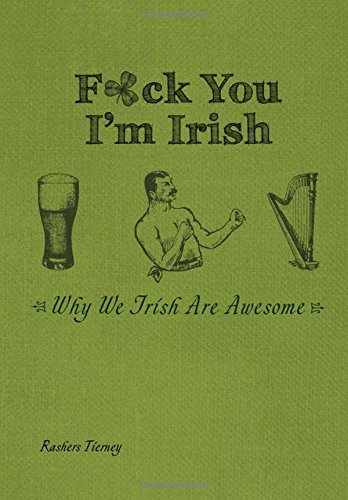 F*ck You, I’m Irish is a tiny, short informational book that is a crash course to the uninformed as to why the Irish are so awesome. The book is somewhat humorous, but is mostly factual. People looking for a less serious, humor focused book might be a bit confused when they find themselves learning historical facts about Ireland and her people rather than a collection of dirty, drinking induced jokes.

The book begins with sections giving general facts about Ireland. It discusses Irish influences in America (largely due to the large influx of refugees during the Irish Potato Famine that began in 1845), and various cultural aspects such as popular drinks, music, language, religion, and mythology. The book lists several types of each category, going into greater detail concerning subtopics such as fairies, the Blarney Stone, and giving example phrases in Gaelic.

The book also goes on to list famous Irish, and Irish American historical figures, including James Buchanan Brady (also known as Diamond Jim), a railroad supplier, businessman, and financier in the late 1800s. There are plenty of famous authors listed, including F. Scott Fitzgerald, James Joyce, and Bram Stoker. It mentions more obscure people like James Hoban – an architect best known for designing the White House – to the extremely popular actor Liam Neeson.

The humor aspect of the book really doesn’t kick in strongly until the final segments concerning Irish stereotypes: red hair, fiery tempers, fighting, sarcastic sense of humor, and drinking. While this last segment is probably what most people assumed the entire book would be about, it’s a little jarring going from the more serious, if lighthearted, historical tidbits that came before.

Overall F*ck You, I’m Irish is an entertaining, if not laugh out loud funny, and fast read. It packs a surprising amount of history into its small size, and keeps the segments short enough that the less studious person may find himself or herself learning, instead of just being entertained. A great and easy read with surprising depth, F*ck You, I’m Irish would be a perfect gift for friends planning a trip to the Emerald Isle in the near future!