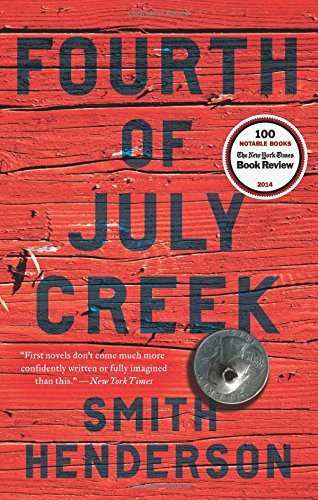 In the stark background of western, rural Montana we meet social worker, Pete Snow, who is trying to help a young boy and his family survive during the End Times. Fourth of July Creek is told in alternating chapters that gives us a glimpse into Pete’s own hard scrabbled life where he just hopes to come out unscathed. During his caseload, he meets Benjamin Pearl and his profoundly disturbed father, Jeremiah, who he tries to be of help and give both clothing and stable housing. The Pearl family is hard won and at times the help Pete offers backfires and affects him on a personal level. As time goes on, not only the state of Montana but the FBI is drawn into this rabbit hole of survival where nothing will ever be the same for the Pearls nor for Pete.

The book showed how the men were different and at the same time, they were eerily similar; both wanting to survive each other and their own personal battles. Even though they try to keep their personal battles on the sidelines, this becomes more of a factor as time goes on which adds to the conflict that will ultimately decide their fate. Montana was an excellent setting choice and this reviewer couldn’t see this story being set anywhere else, especially with the battles ahead of both men. Another part this reviewer liked about this book, what that Henderson wrote it with alternating chapters, one was Pete’s personal life and the next, his professional, which gives readers a better perspective of the bigger picture – where one man is trying to help his fellow citizens and comes away with consequences that he wasn’t expecting.