Kings of Fortune by Eric Cheung 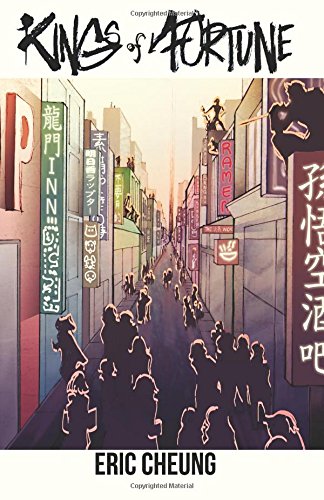 Often times, people take for granted the beauty of the world around them, and it is only after life has changed – either for better or worse – that humans begin to appreciate what it is that they have. Kings of Fortune, written by Eric Cheung, follows the story of Leon, who’s just an ordinary guy working a soul-sucking job. Leon coasts through life; no ambition or passion is found in him at all, as he has no idea what it is that he wants. Until, one day, Leon receives a contract from an impeccably dressed man: he’s sentenced to die at the hands of the Baya. What has he done? Who are the Baya? Why was he chosen? Before he can even begin to answer any of his questions, Leon’s life turns him into Zylo, sending him on a wild, action-packed adventure, and what started as a harrowing journey may somehow end up changing his life for the better.

As a whole, Kings of Fortune makes for an enjoyable read. The writing is adequate; although, at times, the book lacks in richer detail, this does not stop the story from moving along nicely. The dialogue shines, but there are so many characters that it is hard for the reader to keep track of who’s who at times. All action and plot is fast moving and can be quickly devoured, and the highlight of the book is undoubtedly all the well-written action sequences. The only major problem is that, after five or six fights, the action sequences lose a bit of their luster. Readers will find themselves invested, but wishing, perhaps, that the story were a film or a video game. This is not at all a failure of the author. Action sequences are tricky to write, especially when so many are written in one book, as they are incredibly visual moments in a story. While those sequences do work overall, it would be amazing to see the manuscript turned into a film someday – all of those fight sequences would look awesome on a big screen.

If someone asked me to describe Kings of Fortune in one word, it’d be a simple answer: Fun. The novel is filled to the brim with friendly banter amongst friends, intriguing supernatural elements, and pages upon pages of fight scenes. The world Cheung invents is an interesting one, and feels quite original in its setup. Not to mention that, with the exception of a slightly forced romance, there is an abundance of female characters who are all diverse in personality and add to the story. Readers should be warned: the fight scenes in the book can be slightly graphic at times and the main plot of the book does involve the killing of people. If either of those plot points are a trigger warning for audiences, please proceed with caution.

In the end, the book follows through with a nice message, as summed up by Zylo:

“The only thing that has ever stopped me has been myself. The world is mine to tread, mine to live, and mine to love. Life has never looked more beautiful.”

People need to appreciate the life they have and take advantage of it before it’s too late – a lesson quickly learned by the protagonist of Kings of Fortune. Hopefully readers will take Zylo’s advice, before the Baya show up at their front door.