Mother of God: An Extraordinary Journey into the Uncharted Tributaries of the Western Amazon by Paul Rosolie 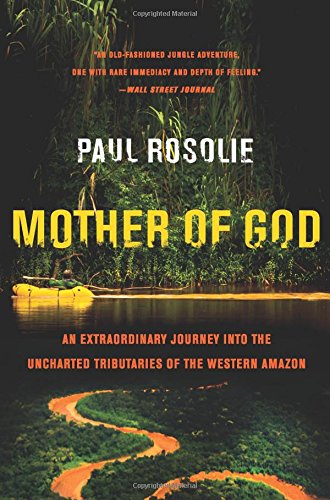 The strange title Mother of God is the English name for the region in Peru in the southwestern part of the giant Amazon basin where author Paul Rosolie encountered his fascinating adventures. His book is filled with just that: a series of great and scary adventures in the planet’s most diverse biosystem. His writing is excellent, and, once you read the first page, it’s difficult to stop — the story flows like the great meandering rivers of the rain forest.

“I chose to focus on the extremes of adventure, and the beauty of wildlife and natural systems.”

As a young eighteen-year-old New Yorker, Rosolie set off on an adventure-trip to Peru where he became a friend in a research camp lead by a British biologist and a Peruvian. We learn about details of flora and fauna, geology, ecology and rain forest conversation, and, since Peru needs income, concessions to logging industries and oil exploration in the most revered reserves. In addition, greedy poachers take endangered species by the thousands to sell overseas. Rosolie’s trip was interrupted by a horrid skin infection, which destroyed his entire dermis and forced his return trip, though he went back in a year. The included photos are good, but a good location map at the beginning of the book would’ve been useful to readers.