Notes from a Dead House by Fyodor Dostoevsky, Translated by Richard Pevear and Larissa Volokhonsky 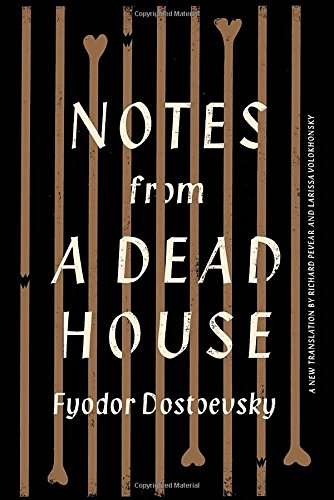 After spending four years in a Siberian Prison Camp for circulating literary works deemed seditious, Dostoevsky did not immediately go on to pen his most classic works; first, having suffered greatly in body and spirit, he returned to the public eye with a semi-autobiographical novel that reflected upon his time in Siberia. This novel, Notes from a Dead House, is an important work in the understanding of a seminal literary figure of the 19th century, and now it finally gets the treatment that it deserves, with a new translation by the much-lauded duo, Richard Pevear and Larissa Volokhonsky, who have previously translated many of the great works of Russian literature.

Dead House recounts the prison experience of one noble, Alexander Petrovich Goryanchikov, sentenced to a camp in Siberia for the murder of his wife. Most of the novel recounts the first month of the narrator’s stay, the time which he most remembers before the days blend together in monotony. Indeed, it is not so much the quotidian that stands out for the narrator, but rather a general impression of the experience:

“I’ve completely forgotten many circumstances, I’m sure of that. I remember, for instance, that all those years, essentially so like one another, went by sluggishly, drearily…I remember that only the passionate desire for resurrection, renewal, a new life, gave me the strength to wait and hope.” (282)

The desire of freedom informs everything in the dull, gray life of prison. But Dostoevsky does not describe a dead place as his narrator would have us believe, for Dostoevsky incarcerates his reader with a whole camp full of lively characters, from Isai Fomich, an old Jew who loves nothing more than to steam himself endlessly within the bathhouse, to Baklushin, who strives to outshine all the other actors during the Christmas performances, along with a host of other memorable individuals.

But it is not just the zany characters that make this novel come to life, but the insights regarding these people who, through either their own will or the will of their society, remain unable to abide in freedom with their fellow man and must therefore be cast out and incarcerated. Notes from a Dead House is ultimately a story of these unfortunate individuals forced to find a way to live together.

The convict that Dostoevsky portrays is a two-faced being; he lives for the moment, but also constantly looks forward beyond present hardship for that next moment. He is a creature of mercurial temperament, cycling from the lowest depth of the soul to the merriest drunken elation. Indeed, over and over, the narrator reiterates how a prisoner saves up and steal money, hording that pecuniary contraband like a miser, living in a state of complete self-denial, all for a single evening in which he is able to squander all his hard-earned kopecks for enough vodka to make him forget for a single night that he is stuck in a prison camp, making such a scene that their fellow convicts are forced to intervene in order to keep him in line. The following day, this convict will return to the grind no better off than he was before, only dreaming still of the next time he will be able to blow all his money on drink.

According to the narrator, many convicts, when they are granted their release from prison, soon repeat offenses that land them back in prison. Dostoevsky does not state directly why he thinks this repetition to be the case, but it seems that most convicts maintain an overabundant sense of freedom, a freedom of action that does not look beyond the present — a need to proclaim agency in the moment no matter the cost to the future in “a convulsive display of personality, an instinctive longing for one’s self” (80). These moments are ultimately attempts to regain identity, despite the fact that “any self-willed display of personality in a prisoner is a crime” (80). These prisoners are individuals with a distinct and exaggerated need to display that individuality, and for that display to be respected; but this individuality is unable to coexist peacefully with society at large. Thus, these individuals are thrust aside to the prison camps of Siberia and forced to find a way to live together despite each prisoner’s unwavering need to express personality and identity. Nevertheless, these prisoners do manage to find common ground in precisely this common need. But Alexander Petrovich is only looking in at this strange struggle of identity, from the outside, despite the fact that he shares the same fate. He is a noble and made an outcast in prison by his rank. As such, he seems the most unfortunate of all. But his position is fortunate for the reader, for it is his voyeurism that allows the reader to see the true face of the Siberian prison camp along with its myriad faces.

Dostoevsky delivers a heartbreaking novel about the struggle of the individual in the face of an authority that would see all personality crushed. It is a ponderous tale, more concerned with impressions of prison life than an actual story, but these impressions are so full of memorable vignettes that this lack of narrative cohesion is easily forgivable. Pevear and Volokhonsky provide a wonderful and lively translation that brings to life this “dead house” where so many individuals were left to stagnate so that the rest of society could plod on uninterrupted. It is readily apparent that Dostoevsky’s time in Siberia held a great deal of influence upon his later works; in Notes from a Dead House we see the first profound inklings of Dostoevsky’s examination of the human condition that come to fruition in his later works. So, if you are a fan of Dostoevsky, or if you are just a fan of literature involving the outcasts of society, go find yourself a copy of this wonderful novel.