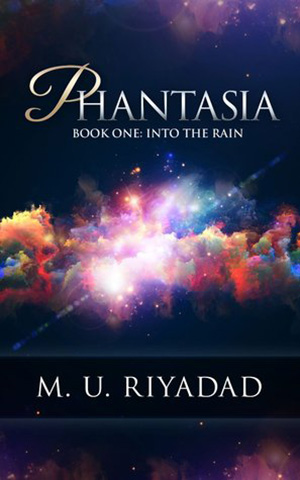 Phantasia, by M.U. Riyadad, is a fantasy novel intermingled with science fiction. It’s about Red, the main character who begins his journey with an exam that’s meant to determine whether or not he gets into a revered academy that will train him to become a fighting machine against creatures called xenobites. He has a group of friends who support him through the process – and eventually all are accepted into the academy that gains them training and more tests. It soon comes to light that Red is being pursued by something evil, and it’s up to him and his group of friends to stand up against it.

There is a lot going on in this book. It begins with a test that ends with Red and his friends staring at some sort of crystal that drops the group into Raven’s nightmare (Red’s seeming forever companion), and goes on to explain the variants and depths of the nightmare. Red loses an important part of his anatomy and Raven becomes trapped in her own nightmare. Much of this novel is exposition; there are many pages where the characters get trapped up in explaining a certain part of the world or planet they’re on, or various species that inhabit said world. The story picks up various lines of plot that are explained away by the characters and then moves on to another bit of plot line that also needs to be explained away. The novel ends with blood elves and a dragon who foretells the future of the main character (in a way that shouldn’t be spoiled but perhaps the reader will see coming), and is reminiscent of Star Wars in more than one way.

Despite the fact that there was an interesting supporting cast of characters and a somewhat interesting story, a lot of the novel is bogged down with the feeling that maybe the author just had too many ideas floating around at once. The supporting cast might have better served the story if they had been developed a little more, and used to tell said story in other ways instead of just blatantly explaining it to the reader in bouts of dialogue. There are some really interesting trains of thought in this novel, and some really good ideas, but they might have been better served with the author choosing a couple and sticking to them instead of trying to cram all of his good ideas into one novel. Fans of the genre might find this one a little taxing, despite the obvious love that went into it.