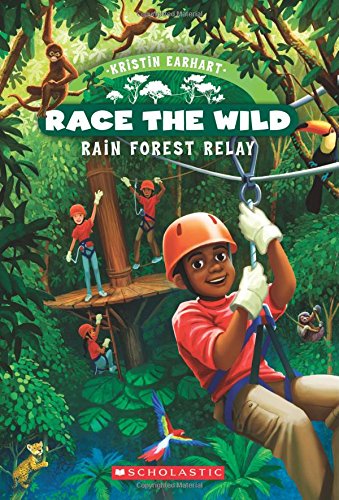 The Race the Wild series has a premise that kids will surely find enticing: main character Russell is participating in a race in four different habitats around the world, completing obstacle courses and using clues to find exotic animals, with an ultimate prize of a million dollars. But Russell ended up on a separate team from his friends, and they’re playing to win, even if it means using tricks to beat him. Couple that with the array of scary Amazonian creatures Russell and his team encounter, and this race may not be an easy one to win.

This is definitely a book for younger readers, perhaps as a first chapter book for a 2nd or 3rd grader. It’s a quick read, and the illustrations inside the book help keep kids’ interest, along with sidebars between the chapters about the various animals mentioned in the story, which provide a little education along with the entertainment.

However, some of the phrasing is awkward, and it often confuses simple language with simplistic language. There are many children’s books with easy language that is still poetic and evocative, and this book falls short of that. And although the Amazon holds plenty of danger for the kids, the danger never feels real, especially since the game includes adult chaperones, who render even monstrous piranhas and snakes ultimately harmless. This may be a comfortable level of danger for young kids, but it made the jungle seem to hold no more terrors than Disneyland.

But this series provides an engaging story for grade-school-age children, and although the plot is pretty basic, there are still plenty of thrills. It would be fun for kids to imagine themselves in Russell’s shoes: kayaking down the Amazon, getting to see wonderful creatures like capybara, river dolphins, and the almost alien-looking glass frog. Russell’s growing relationship with his new teammates, and the way they work together to creatively problem-solve, is inspiring. In the end, Russell is left with a moral dilemma that will be interesting to see solved in future books. In spite of the book’s occasional flaws, kids will be waiting eagerly to see who wins this wild race.