The Fishing Fleet: Husband-Hunting in the Raj by Anne de Courcy 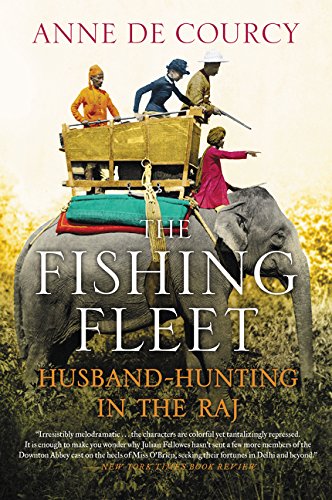 The Fishing Fleet that went to sea from Britain to colonial India in the 19th and early 20th century was not after fish. Rather, it consisted entirely of eligible, young British girls seeking husbands from among equally eligible British men in service to the Raj as colonial civil servants or soldiers. And what stories those women, and a few of the men, have to tell!

“By the 19th century,” author Anne de Courcy writes, “India was seen as a marriage market for girls neither pretty nor rich enough to make at home what was known as ‘a good match’, the aim of all respectable young women… In India, where European men greatly outnumbered European women, they would be besieged by suitors, many of whom would be richer or have more prospects than anyone they could meet in England.” In the early Fishing Fleet days, “marriage was often undertaken with the sort of rapidity usually confined to spotting a business opportunity and pouncing on it, a kind of matrimonial bran tub where it was in the interests of both parties to make up their minds quickly – the girls because they did not wish to go home to probable spinsterhood and the men in case someone else seized the prize.”

The author compares the quest to get engaged with speed dating. It sometimes happened aboard ship on the way out to India or within days of arrival. “Often, minds were made up and a lifelong commitment to another human being promised after only a few meetings…” And, upon the untimely death of a spouse, women who lost their husbands to an untimely demise had no difficulty in replacing him. Some widows received proposals to remarry on the steps of the church after the funeral.

The Fishing Fleet is a remarkable matrimonial tour de force, full of fascinating stories from personal diaries, set against well documented descriptions of the colonial social scene. The British Raj and the establishment of crown rule in colonial India began in 1858. Prior to that, during East India Company times, European men often chose spouses from among the local Indian women. But, once the Raj was established, that was off and an ‘us and them’ attitude prevailed, based on “unquestioning acceptance of the need to maintain purity of blood and links with the motherland.”

Thus, when young British women, girls really, disembarked from ships at Bombay, the chase was on, both ways. In India the girls encountered a glamorous, adventurous and often challenging lifestyle. And, once married to a British soldier, or member of the Indian Colonial Service, or to some other European (often ten or more years her senior), and children were born, they too eventually joined the ‘fishing fleet’. It was customary that as soon as they reached school age, youngsters would be send home to boarding schools in the UK. Then, once they were of age, the boys would likely seek service back in India, and the girls would return to rejoin their parents and begin fishing for a husband for themselves.

‘Husband Hunting in the Raj’ is a fitting subtitle for the book, and what a hunting scene it was. The chapter titles, each a quotation from someone’s diary, are telling. For example: ‘Happy hunting-ground of the single girl’, is about the women who went out. ‘Kisses on the boat deck’ describes love at sea, where some girls were proposed to before they landed in India, and once there they were there they were catered to and chaperoned day and night by relatives, friends, and personal servants. ‘A hell of a heat’ describes the oppressive climate that drove the Brits up into the cooler Himalayan foothills during the hot season. Life in the hill stations, like Simla, the summer headquarters of Raj, is worthy of an entire book of its own.

‘There are so many “Ladies”’ describes viceregal entertainment, and the social whirl is further elaborated in ‘Parties, parties, parties’. “Viceregal entertaining,” de Courcy writes, “was of a glamour unknown to the courts of Edward VII, George V and George VI, let alone that of Queen Victoria, thanks to the size and vistas of the viceregal palaces, the plethora of servants in their scarlet and gold uniforms moving noiseless and impassive among the guests, the scents of the flowers, the brilliance of the light and, above all, the presence of the princes.” The princes were “the various Indian maharajas, rajahs, ranas, nizams, gaekwars and nawabs [who] continued as rulers under the paramountcy of the British Crown.”

A chapter on the handsome, glamorous and fabulously rich maharajas, is provocatively entitled ‘It would be a pleasure to be in his harem, I thought’. Another chapter, about Engagement, is called ‘”No” would have been unthinkable’, and is followed by others describing how the new couples settled into colonial family life, with its supremely elite British overtones.

While largely about the women of the Fishing Fleet, there are also descriptions of the men’s lives and diversions. The popular writer and ex-British Gurkha colonial officer, John Masters, writes, “It is useless to pretend that our life was a normal one. Ours was a one-sexed society, with women hanging on to the edges. Married or unmarried, their status was really that of camp followers.” To cope with loneliness before marriage, some of the men poured their energies into polo, or hunting (especially tigers), and some, he says, “buried themselves in their work and …became unmitigated nuisances through the narrowness of their conversation.”

Whether you are a history buff or are simply interested in the lifestyles of the rich and beautiful (though not all of the girls were beautiful, nor married into wealth), The Fishing Fleet is a satisfying read. At times you may find it difficult to put it down in the midst of one of the many accounts borrowed from the women’s detailed and sometimes mischievous memoirs.