We Chose to Go by Charles B. Smith 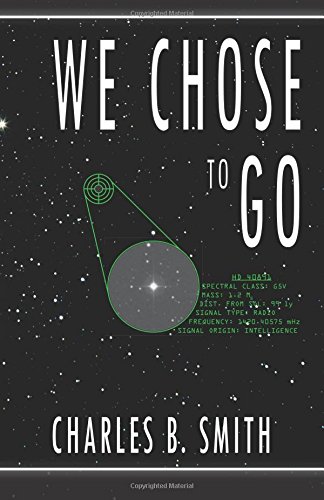 Charles B. Smith’s We Chose to Go is a smart and original work of science fiction. Set in the not-so-distant future, this story chronicles the experiences of an ambitious woman who dreams of space exploration. Rae, a young American woman, is encouraged by her parents to reach her fullest potential from a very young age. Influenced by a father who dreamed of space travel, she sets her mind toward Earth’s newest and most exciting of mysteries: A mathematical message sent to Earth from a deep space planet. She is not sure if deep space travel will be a possibility within her lifetime, however she sacrifices almost all personal relationships and devotes all of her time and effort in order to be ready if such an eventuality occurs. Through the astounding and gripping events that occur, Smith weaves a tale that is a perfect balance between unpredictability and plausibility.

This story, which is heavy on the narrative and light on the dialog, is used as a vehicle to convey a message. The themes speak to the nature of humanity and the dreams and ambitions of the human spirit. While preciously fragile, dreams can also be stubbornly unbreakable, and it is this duality that can lead humans to achieve feats that are either extraordinary or catastrophically, maliciously destructive. We Chose to Go captures this balance, and explores the lengths humanity as a culture, and humans as individuals, are willing to go to obtain their goals.

The characters within this story are all, perhaps a little unrealistically, unfaltering in their devotion to their cause. This denies the reader of ever truly seeing a character struggling with the very human tendency of doubt. The narrative itself it as determined in its message, as the characters are resolute about their beliefs. However the story, with its captivating details and meticulously designed sequence of events is an enthralling page-turner, whose poignant message is clearly received.

While set in the future, We Chose to Go explores the dreams and concerns plaguing many living today, and warns against a fundamental flaw in human species. This makes the story a relevant commentary on current issues while also functioning as a character study of our species. Through loyalty, love, loss and the clash between religion and science, We Chose to Go will undoubtedly enthrall a large audience.