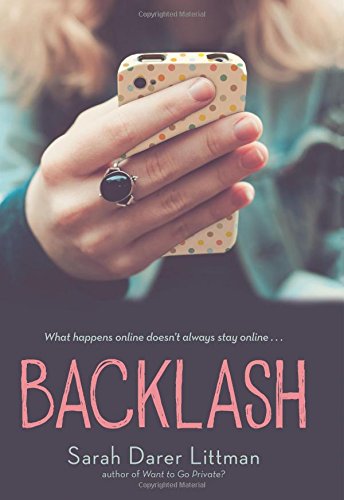 When reading Backlash by Sarah Littman, I was immediately taken to the world of cult classic movies like Mean Girls and Heathers the moment I looked at the cover. Upon reading the first chapter I knew that this book was going to be fast paced, relevant to the current times, and at times very difficult to put down. Written from several characters’ perspectives, the book starts off with a bang with an attempted suicide.

The book is divided into three parts. The first part describes Laura’s initial suicide attempt, a fragile, formerly overweight girl who perhaps got a little too involved with someone online that she’d never met. Alternating perspectives include Sydney, Lara’s younger sister who resents Lara for consistently inconveniencing her life, Bree, Lara’s former best friend and next door neighbor who posts terrible pictures to Facebook, and Liam, Bree’s younger brother who has a crush on Sydney. Each of the four main characters have a distinct voice with Sydney being perhaps the most relatable.

The story continues to explore the backlash of cyber bullying at its worst and the consequences that can come from them. Each of the characters has to work through several issues that are common experiences in high school. Being bullied for weight is such a relevant topic now with a high percentage of today’s youth being overweight. Combined with the overall saturation of social media, which Littman perfectly captures, the whole book comes across as highly probable and believable.

Littman tackles an important topic that doesn’t get discussed as much as it should. Enjoyable characters, fast pacing, and engaging plot twists mean that Backlash is not only smartly written for the time, but is also something that will be readable as long as there is social media and people bullying others for the silliest of reasons.