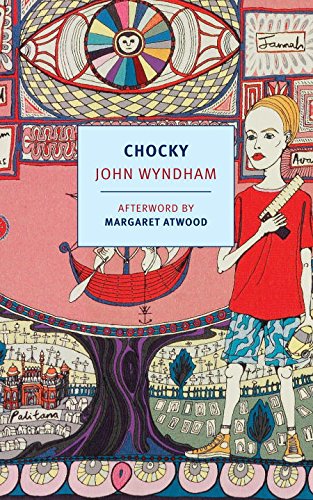 I first encountered Wyndham in that delightful tale of carnivorous plants overrunning the earth entitled The Day of the Triffids. What struck me most about Wyndham’s style is his natural (and seemingly effortless) dialogue with which he breathes life into his characters. His characters always seem true to me, always indefatigably human despite the extraordinary science fiction setting in which they find themselves. It is an extraordinary gift to write such charming characters in a genre piece when it is so easy to lean on the crutches of plot and trope. Chocky, Wyndham’s final novel (about to be reprinted by New York Review Books), may be his most charming book of all – a domestic comedy dealing with the trials of a small family’s encounter with an unusual alien presence.

David and Mary Gore are a typical English family concerned mostly with the minutiae of their mundane, suburban lives – so when their son, Matthew, appears to have an imaginary friend named Chocky, it is the source of domestic concern and amusement similar in feel to Shirley Jackson’s story, “Charles.” Previously, Matthew’s younger sister, Polly, had an imaginary friend named Piff, who eventually disappeared, but Chocky appears to be of a species wholly different. Of major concern to David and Mary are the peculiar attitudes toward conventions that this imaginary friend incites in their son. Matthew begins to obsess over the length of the week, the rudimentary physics of automobiles, the use of a standard number system instead of an unusual binary number system. David begins to doubt the imaginary quality of Chocky with the proliferation of such unusual notions from his son and employs psychologists to examine Matthew and rid him of this Chocky. But nobody seems to be able to offer any help. Suddenly, Chocky announces his intention to depart and the Gore family breathes a collective sigh of relief. But this relief is short-lived as Matthew is kidnapped and mysteriously returned over a week later. The mystery persists until Chocky returns to Matthew for a final goodbye, in which Chocky (through Matthew) reveals to David that she is from another world on a mission to improve the condition of humanity and that Matthew was kidnapped on suspicions of her presence. Not wanting to endanger Matthew further, Chocky leaves the Gore family forever.

As I mentioned previously, the book and its characters are utterly charming. One becomes completely at home with English life and the attempts of David and Mary to rationalize away this imaginary friend, attempts that become quite humorous as they struggle to hide the phenomena from family and the media. The character of Mary Gore is particularly sympathetic and well written as she struggles with the apparent mental instability of her son and her instinct to protect him. Yet, shrouded within this blanket of domestic humor, is a delightful science fiction story of first contact. It is not a scary, pessimistic story, as is so often the case with alien encounters, but a strange and hopeful one. Chocky can interact with the world only through the medium of Matthew, and thus her communication is limited by Matthew’s own knowledge and experience. It is through this mental and physical limitation of Matthew that she struggles to enlighten mankind, freeing it from the bondage of convention, specifically regarding limited fuel resources and elementary physics. This benevolent intention of Chocky and optimistic approach to alien contact is refreshing. The novel does not focus on the alien presence of Chocky, who for most of novel is thought to be a figment of the imagination, but instead on the Gore family, on the human condition, and on how mankind would respond to a benevolent alien presence in the face of challenges to its own conventions. Chocky begs the question: if mankind was shown a better way, would it change? Would humanity respond to an alien presence like Mary does, treating it as a nuisance and a threat? Or like David, viewing the whole situation as a source of mild amusement? Or, finally, like Matthew, who embraces Chocky wholeheartedly and is crestfallen when she departs?

The other startling concept presented in Chocky concerns the limitations of language. Chocky is limited by Matthew’s vocabulary and Matthew’s experience (as she only encounters the Earth through the medium of Matthew’s mind). As such, Chocky is unable to fully exchange a wide range of advanced ideas. Chocky cannot explain why human physics is inelegant because Matthew does not know the words to give her, just as Chocky cannot understand many human conventions because she has no alien counterpart with which to relate it. In this frustrated communication, the true beauty of language is beheld in its challenged limits. Language is the key limitation to mankind’s progress. Mankind itself is in a sort of adolescence along with Matthew, so that if we encountered an advanced alien race, we too would be hard pressed to understand, for we would not have the words to be made to understand new concepts. Language is the gatekeeper of knowledge, and without the words, we are as lost and as ignorant as Matthew. Just as Chocky was forced to do for mankind, slowly nudging mankind to progress by hinting at and inspiring Matthew, so writers must do every day for humanity with language and literature. Literature expands the boundaries of our understanding, opening new worlds, nudging and hinting mankind forward by means of words strung elegantly together in new and inspirational ways.

Chocky, itself, stands as one of these inspirational works, nudging the audience forward to greatness beyond the stale limitations of static human convention, creating the space for growth in the guise of this delightful, domestic comedy of Wyndham’s. This work is a tremendous capstone to an already staggering body of work, and it is the duty of all those who value laughter, who value elegant language, who value the progress of mankind, to read this book and be opened to greater heights by that mysterious Chocky.