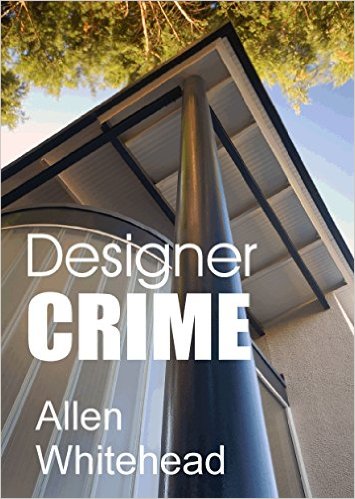 Designer Crime by Allen Whitehead is a thriller/heist novel that centers around a group of architects who fall into misfortune when one of them gets involved with a shady casino owner who doubles as a loan shark. In the process, they lose one of their own and decide to take revenge – by robbing the very man who they believe is responsible for his death. In the meantime, they form new relationships with another and some of them even fall in love.

Designer Crime moves along at a pretty break-neck pace and the writing is pretty staunch, which leaves the characters a little under-developed. The author introduces new characters pretty frequently, up until the very end of the novel the reader is still being introduced to new characters, most of which are generally only summed up with one or two lines and a lot of dialogue. The story itself is fairly interesting, as who doesn’t want to take the law into their own hands on occasion or take vengeance on those who wrong us? The plot does seem a bit jumbled, as there are short diversions that take away from the central storyline and might leave the reader feeling a bit confused as to how and when all of the threads introduced will be picked up again and explained.

Most of the story is interesting enough to keep the reader reading, even though the dialogue can seem a bit wooden and the villains are incredibly stereotyped. Overall, readers will most likely find themselves rooting for the protagonists and hoping that the antagonists will get put behind bars where they belong – paving the way for the survivors to have the happy ending that they all so desperately deserve. It’s worth picking up for those who enjoy stories about heists, planted drugs, and creepy bad guys getting what they deserve.